Coach Pat Stark: ‘He was part of our family’

Coach Pat Stark: ‘He was part of our family’

Former players reflect on what their coach meant to them 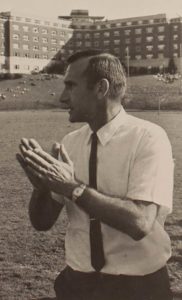 Peter “Pat” Stark, who had a highly successful career as a coach and an administrator at the University of Rochester, passed away on June 19. He was 90 years old.

“He was not only a coach, a mentor, and a friend, he was part of our family—and so many people would say the same thing,” says Jeff Wittig ’86, a former quarterback for Coach Stark. “Coach sincerely cared about everyone—his players, our families, alumni, any student. That’s just who he was.”

“Coach played tough but was always honorable—no cheating, no cutting corners,” adds John Cogar ’71, a running back on Coach Stark’s first team at Rochester. “He showed everyone tremendous respect and he was truly a man of unwavering character. I was proud to play for him.”

Stark was the head football coach at the University for 15 years, 1969–1983. In that time, his teams won 69 games in a schedule that featured some of the eastern region’s elite football squads. Following his retirement, Stark served as an assistant athletics director for external affairs at the University. He helped students with placement for internships and jobs following their graduation. Stark was also instrumental in creating the University’s Athletic Hall of Fame.

“Coach Stark had an innate ability to connect with people and stay connected with them,” says George VanderZwaag, executive director of the Department of Athletics and Recreation. “That transcended football, too, as he was genuinely interested in not only his players but in everyone with whom he interacted. His ability to do that was unique—it was a gift, really.”

Coach Stark was a stand-out football player during his undergraduate days at Syracuse University. He was selected as the All-East quarterback by the Associated Press and United Press International in 1952 and 1953. He was named to the Red Grange All-America Team in 1953.

After graduation, Coach Stark worked as an assistant coach for the Orangemen and was part of the staff when Syracuse won the national championship in 1959. After that and before coming to the River Campus, he served as the offensive coordinator at the University of Rhode Island and at Harvard University. Coach Stark was also a proud veteran of the US Army.

“Coach was sharp as sharp could be—he never missed a beat,” says John Minora ’81, who played defensive tackle for Coach Stark. “He remembered everything—every play, every student, every family member’s name. He’d remember details that would just astound us, such as years later recalling my high school guidance counselor’s name and my uncle’s name and where he fought in WWII. It really showed me how much he cared. Just incredible.”

“In the very first week I was on campus, Coach Stark went out of his way to make me feel welcome and help teach me about the history of the University of Rochester football program,” said current head football coach Chad Martinovich. “Over the course of my time here, he became both a friend and a mentor to me. Coach Stark has left an unrivaled legacy here, and I’m grateful I had the chance to know him.”

“Coach instilled a lot of confidence in me—he did with all of us,” adds Michael Recny ’79, a defensive player on Coach Stark’s team. “I’m forever grateful to him for believing in me.”

Read more about Coach Stark here. Some of the above content was excerpted from this original article.

Coach Stark’s former players are raising funds to name a space at the University in honor of their mentor and friend. To learn more and to support this effort, contact Terry Gurnett, associate director of Rochester Athletics. Or you can make a gift online today.

From the sidelines: remembering Coach Stark 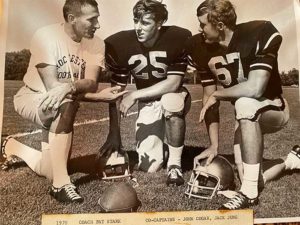 I was lucky enough to be on Coach Stark’s first team back in 1969. We had all heard about him and about the dramatic Harvard-Yale game from a few months before. That’s when Harvard scored 16 points in the final minutes of play. The turn-around and moral victory was so great that, the next morning, the Boston Globe ran “Harvard Wins, 29-29” as its headline.

When Coach arrived at Rochester, he got the team together and told us he wouldn’t tolerate anything but a winning attitude. He wanted our hair kept short, our uniforms tucked in, and punctuality on all things. He said that if you don’t do the small things right, you’d never get the big ones right. With him leading us, we became a great team, too—6-3 the first year and 8-1 the second. We even played against guys that ended up winning Super Bowl Games.

Here’s a story that captures who Coach was. In the early 1980s, I saw that Rochester was going to play at St. Lawrence University, which isn’t far from where I’ve lived for decades. My 7-year-old daughter and I got in the car and drove the hour or so to the game. By the end of the fourth quarter, Rochester was down by a bunch of touchdowns. One of our running backs got injured so Coach sent in a second-string player who ended up getting the ball, but he ran the play incorrectly.

The dejected player went back to the sidelines. Coach put his arm around him and told him, in a firm but teaching way, what he should have done. That impressed me. Very few head coaches would put forth that amount of energy and compassion to take a few minutes to teach a second-string player like this, especially with just seconds left in a game that you knew you’d lose. It brought tears to my eyes. My daughter even looked at me and said, “I’m sorry your team lost, dad.” I told her that wasn’t what prompted those tears. 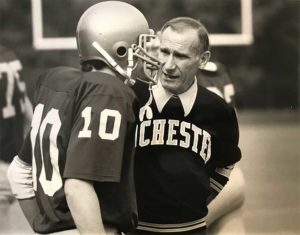 “One of my fondest memories of Coach Stark came from just a few years ago. My son, Jacob ’19, ’20S (MS), was on the basketball team. Coach attended most of Jacob’s home games. He’d sit with me and my family and he cheered on my son like he was his own grandchild.

What really stood out to me was his interest in me as an individual, not just a football player. That came through from the very beginning, when he recruited me in high school. He cared about our futures, too, and prepared us for interviews with companies when they came to campus for job fairs. His support helped me get multiple job offers. It’s what launched me from college to career.

I remember this other story. After games, as a team we’d watch films, to see what we needed to learn for the future. In this one film, I threw a pass to Bob Ford, a great halfback. It was a short pass, right in front of our bench. Bob went running down the field, and so did Coach. They both ran along sideline, for a 30-yard gain. I didn’t notice that during the game. I don’t think anyone did. We all saw it on the film though. It was amazing to watch the way Coach ran and, then, how he the patted Bob on the back after he got tackled. Seeing him do those things really showed his passion for the game and how big his heart was.

Coach was such a great person. I will never forget him, neither will my family.”

“I called Coach both my “mentor” and my “tormentor.” It was kind of a joke between us. He taught me and the rest of his players a lot of lessons. Some of them were hard, but that’s part of growing and learning. If someone cares about you, it’s not going to be all good.

Coach imparted a lot of wisdom, too. For instance, he always told us “be prepared,” which is a skill he knew we needed in life. He also underscored how important it was to be professional. We had to wear a suit and tie for our away games and if we didn’t, there would be negative repercussions. He showed us the importance of loyalty, too. He was loyal to us and we were loyal to him. Everything he did demonstrated that loyalty, while we played for him and years after graduating.

Coach changed my life and made it better. He was a father figure to me, too. I came from a blue-collar family and I didn’t know if I could afford the University. I remember that he took the time to go down to Admissions and Financial Aid on my behalf. I often wonder what my life would have been like if he hadn’t been such a big part of it.

Athletes spend so much time with our coaches—two-three hours a day in season and many hours out of season, too. That’s an incredible amount of time to spend with someone, and to spend it with Coach Stark was something I will always be grateful for. He was a wonderful man who influenced so many young men’s lives.”

Unlike a lot of Coach Stark’s players, I wasn’t recruited. I played a little in high school and I wanted to play in college, so as a walk-on I spent two years riding the bench before I earned a starting role in my junior year. Prior to then, I told myself to keep working hard in practice and hoped it would eventually pay off.

When I was a sophomore, one day after practice Coach came up to me and said, “Hey Reck (that was his nickname for me), you are looking good. You keep practicing like that, and you will play well for us soon.” Coach was right. The next season I started in the defensive backfield and at the end of my senior year I was named Outstanding Back on Defense. Coach’s words in that locker room two years earlier did a lot to motivate me to stick it out until my turn came.

A few years ago, Coach and I met up again for lunch and I brought some pictures with me from a few of our games. He looked at them, smiled, and immediately launched into vivid stories about more than one of them. His memory blew me away. Those games were 40 years ago, and he remembered intricate plays and final scores. What a sharp mind he still had.

Coach was so genuine, too. I remember him making it a point to introduce himself to my parents after the first home game of my junior year. I’ll never forget that. He would also ask about my career and my family after we reconnected after graduation.

Because of football, and especially Coach Stark, I graduated with a lot more confidence than I had when I entered Rochester. I’m forever grateful to him for believing in me.

Have a story about Coach Stark? Please share them below. We’d love to hear from you.