Rochester astronomers reflect on their contributions to Spitzer Space Telescope

Rochester astronomers reflect on their contributions to Spitzer Space Telescope 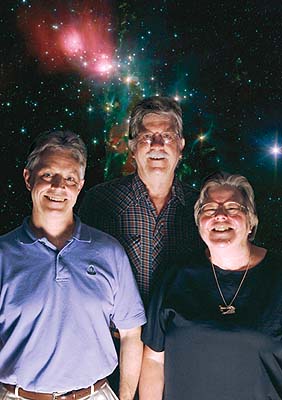 In January 2020, NASA’s Spitzer Telescope retired after more than 16 years of discoveries. The telescope, which was launched into space in August 2003, is being celebrated for exploring stars and planets in the faintest depths of the universe and providing data allowing researchers to better understand the life cycles of stars and planetary systems.

As charter members of the telescope’s instrument team, University of Rochester faculty members Bill Forrest, Judith Pipher, and Dan Watson in the Department of Physics and Astronomy were deeply involved in the design of Spitzer and two of its three instruments: the Infrared Array Camera (IRAC) and the Infrared Spectrograph (IRS). Senior research engineer Craig McMurtry also worked on the development of the IRAC. The infrared instruments on Spitzer were designed to penetrate the thick dust and dense interstellar clouds that obscure most of the visible spectrum of light.

“Despite the stress of our long and stormy development phase, I loved working on this mission, and I’ll miss having regular contact with the satellite,” says Watson, a professor of physics and astronomy.

In addition to designing Spitzer’s instrumentation, Rochester faculty also led the observatory’s largest observational programs on star and planet formation, making a specialty of those which used the infrared spectrograph. Highlights include the discovery of Jupiter-like planets around the youngest stars, which reduced the previous consensus age of giant-planet formation by a factor of about 100 and required the standard models of giant-planet formation to be substantially rebuilt.

The first phase of Spitzer’s mission ended in 2009 when the telescope ran out of the liquid helium coolant that kept some of its instruments chilled. This became of the start of a second phase for Spitzer, it’s “warm mission,” with some of the instrumentation, including the IRAC, still working at full capacity.

“It’s been a wonderful experience,” Pipher says of working on the Spitzer project. “Once the cryogen was expended, so-called ‘Warm Spitzer’ continued to produce amazing results with the arrays our team worked on. In fact, most of the later results were not even imagined possible when Spitzer launched in 2003.”

The telescope relayed its last data points earlier this week and will enter a hibernation mode but will continue to orbit the sun.

“Spitzer is closing in on being twice as far away as the sun,” Watson says. “It’s fun to reflect now, on holding parts of the satellite in my arms while it was being built. Spitzer’s orbital period around the sun is a little longer than a year; Earth will ‘lap’ Spitzer in 2063. NASA has sometimes said it would therefore plan to recover the satellite in 2063, and I’m looking forward to that.”