In 2014, a Rochester high school was on the brink of closure by New York State. A partnership with the Warner School of Education helped turn things around, serving as a model for improving urban education nationwide. 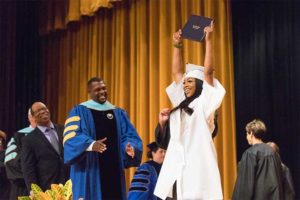 Since the partnership between East High School and Warner began, the goal has been to build a cultural transformation in which stakeholders achieve a sense of ownership in their relationship to the school. This includes all those engaged—students, faculty, staff, parents, and others. The idea is that for academic achievement to take place, there has to be an environment to support it.

Shaun Nelms ’13W (EdD) leads the partnership as superintendent of the East High Educational Partnership Opportunity (EPO) and as the William & Sheila Konar Director of the Center for Urban Education Success (CUES) at the Warner School of Education.

It’s a work in progress but early results are encouraging. At the end of four years, East’s graduation rate has risen from 33 percent to nearly 70 percent. Suspensions and fights have dropped dramatically since then, too, from around 2,500 to fewer than 500—down more than 80 percent.

“The school culture here now demands mutual respect in and outside the classroom. When we focus on building relationships, kids learn better and they are happier. Our students are truly taking pride in their school.”

Families have responded positively to new initiatives designed to support students socially and emotionally, and people who’ve worked at the school for years point to a discernable change in the whole culture.

The partnership has also brought expanded offerings and student participation in sports and the arts, and made improvements in culinary and optical programs that combine professional training and experience. Students also meet daily in “family groups” that foster connections and provide social and emotional support. Together, they are defining their community.