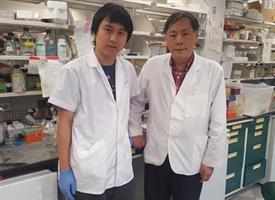 Wilmot Cancer Institute scientists believe they have figured out why a commonly used drug to treat late-stage prostate cancer often stops working after four or five months and appears to have a dual function that later turns the cancer into a relentless aggressor.

By describing how the drug, enzalutamide, inadvertently causes the harmful transformation, corresponding author Chawnshang Chang, Ph.D., and colleagues believe they have also discovered a way to block it from occurring, at least in mice. The study, led by Jie Luo, a graduate student from the Department of Biology at the University of Rochester, was published in the journal Nature Communications.

“As more patients look to enzalutamide to extend their lives, even for just a few months, our goal is to find ways to make the drug work for longer periods and to block the dangerous pathways that lead to adverse side effects,” Chang said.

Prostate cancer is the second leading cause of cancer death in American men. Although some early-stage types, with a low Gleason score, can be treated with a “watch and wait” approach, other types are higher-grade cancers that require surgery and androgen deprivation therapy (ADT). The goal of this treatment is to lower the amount of male sex hormones (androgens) in the body, which fuel the cancer. An especially aggressive subtype of the disease is known as castration-resistant prostate cancer, which keeps growing despite treatment.

For men who have this aggressive form of metastatic prostate cancer and are no longer responding to chemotherapy, enzalutamide can extend survival by an average of five months. In 2018 the Food and Drug Administration also approved the drug to treat men who have castrate-resistant prostate cancer that had not yet spread.

But enzalutamide, a pill, can cause side effects. One of the worst effects is neuroendocrine differentiation (NED), an increase of neuroendocrine cells in the prostate tumors. An abundance of NED cells makes tumors resistant to treatment.

Chang and Luo identified non-coding RNA-p21 as the main culprit for inducing neuroendocrine differentiation, by the fact that IncRNAp-21 can switch the function of a key gene, EZH2. They also showed that IncRNAp-21 is highly expressed in NED prostate tumors.

Earlier, scientists believed that only a tiny percentage of advanced prostate cancer tumors underwent neuroendocrine differentiation. But recent studies estimate that 30 to 40 percent of patients have tumors containing aggressive neuroendocrine prostate cancer cells for which the average survival rate after detection is less than one year – making more patients vulnerable to the worst-case disease progression, Chang said.

Edward Messing, M.D., a national and international authority in urologic cancers who treats patients at Wilmot and UR Medicine, said the latest discovery has the potential to impact men with challenging cases.

“Dr. Chang’s team has identified an important molecular mechanism that affects many of the thousands of men with advanced prostate cancer who will eventually succumb to their disease,” Messing said. “Understanding and reversing the ‘switch’ that causes neuroendocrine differentiation should prolong the lives of these men and significantly reduce their suffering.”

Although no treatments are available yet in clinical trials to block to molecular switch, Chang’s lab identified a small molecule drug that appears to work in mice; researchers elsewhere have revealed similar drugs, and further study is needed.

The National Institutes of Health and the Taiwan Department of Health Clinical Trial and Research Center of Excellence funded the investigation. Chang is the George Hoyt Whipple Distinguished Professor of Pathology, Urology and Radiation Oncology. His lab focuses on the androgen receptor and its association with several cancers.