Helping teens with asthma: ‘Is there a better way?’

Helping teens with asthma: ‘Is there a better way?’

Being curious. Wondering why things happen the way they do. And always wondering if there’s a better way.

For example, imagine sitting across the table from a teen with chronic asthma. As you talk to each other, the teen is wheezing and coughing–without even seeming to notice it.

Alarmed, you ask if the teen needs help. The teen simply shrugs. “It’s okay; I’ve had this all my life. The wheezing will go away in a few minutes.”

Would you let it go at that?

Rhee didn’t. When the professor of nursing at the University of Rochester encountered this phenomenon again and again among the teens she studied, she knew she needed to come up with something—some process, some device that would help these teens better manage their asthma. Otherwise, the disease would continue to scar their lungs, “remodeling” healthy, flexible airways into rigid structures that would eventually cause far worse problems.

“I wanted to focus on something that affects a lot of kids, so I chose asthma.”

A new career in a new country

It was a challenging problem, to be sure. But at least Rhee knew she was in a position to do something about it.

She had not felt that way when she graduated from nursing school in Seoul, South Korea, and began working in a hospital.

For part of the time, Rhee worked in a pediatric oncology ward.

“I was so depressed,” Rhee says. “The children kept dying, even when they were getting good care.”

Rhee began asking questions. Even if there wasn’t a cure—were there other ways to alleviate the suffering of the children and their families?

“I wanted to do something where I could make things better,” she says.

That’s when Rhee decided to leave clinical nursing and pursue research instead. And she decided to come to the United States to do it.

Twenty-five years later, her school friends back home still ask her “‘How can you get up to talk in front of people, especially in a language other than your native tongue?’” Rhee says.

Her friends, like Rhee, learned how to read and write English in Korean schools, but not how to speak it.

“When I came to the states, it was so scary,” Rhee says. “There were times I couldn’t understand the homework assignments we were given. But, to learn to speak English, you have to live in it. So, I just put kept putting myself in all kinds of different situations.”

For the first two or three years, she would first visualize what she wanted to say in her head—with all the nouns, verbs, adverbs, and adjectives organized in proper, complete sentences—and then “regurgitate it.”

But one day, she decided to visualize what one of her American friends was saying.

“I realized that she was leaving out adjectives, using the wrong verbs, speaking English that was totally inaccurate grammatically,” Rhee says. “But everybody understood what she was saying.”

That eased a lot of Rhee’s fears.

She completed a master’s degree at the University at Buffalo and a PhD at the University of North Carolina at Chapel Hill, where her dissertation examined how developmental factors affect the health of adolescents.

She narrowed her focus further during her first faculty posting at the University of Virginia.

“I wanted to focus on something that affects a lot of kids, so I chose asthma,” Rhee says. “Also, my sister has asthma, so I knew about it from my own family.”

She received funding from the National Institutes of Health to develop a peer-led asthma self-management program for teens. But she knew it would be hard to find enough asthmatic teens to work with in Charlottesville, a relatively small college town. Rochester offered a larger metropolitan population and a larger potential pool of study participants—along with the prospect of collaborating with a senior investigator in the field. She joined the University of Rochester’s School of Nursing in 2007, and started her research with 128 wheezing, coughing teens. 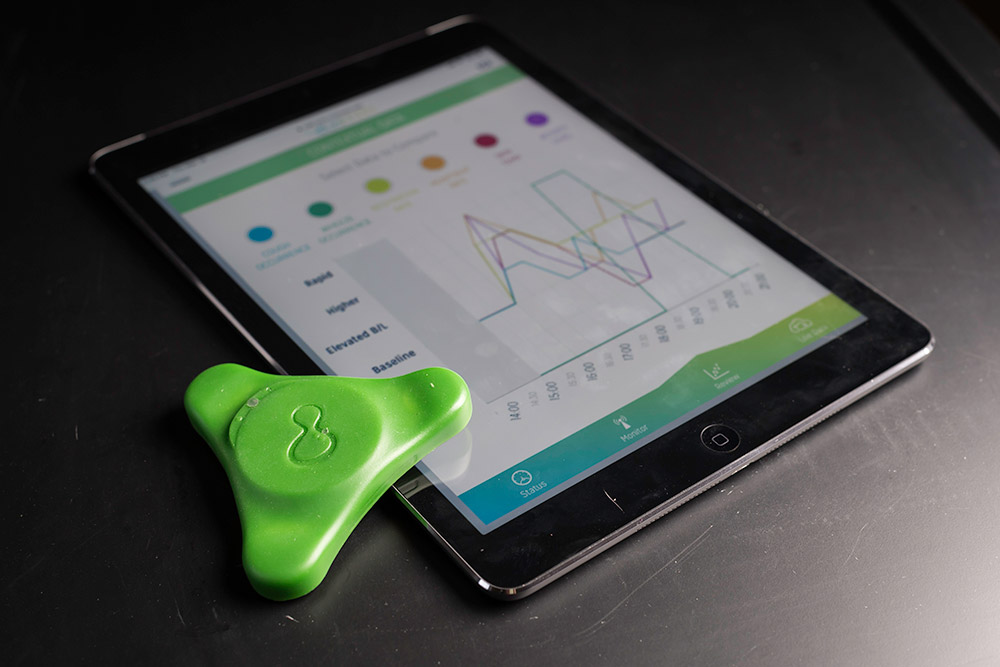 ADAMM—the Automated Device for Asthma Monitoring and Management—is a wearable device paired with an app and algorithm that helps teens stay on top of their asthma symptoms. (University of Rochester photo / J. Adam Fenster)

A medical device even a teen would love

So how could she get these teens to take their disease seriously, and more closely monitor their symptoms?

“Kids love technology,” Rhee says. So, she came up with a novel idea: Have them wear an attractive pendant or necklace programmed to detect the sounds of wheezing and coughing. It would connect to a mobile device that would then display the frequency of the symptoms so the teens could better monitor and manage them.

Rhee found a collaborator across the street, on the University’s River Campus—Mark Bocko, professor and chair of electrical and computer engineering—whose lab could develop algorithms to recognize the signature sounds of a wheeze or cough. Bocko suggested combining the detection and the data display into a single, more economical mobile device. They dubbed it ADAM: Automated Device for Asthma Monitoring and Management.

After several iterations, the device was ready for a feasibility study to determine if it would not only work, but also be accepted by the teens. The feedback was positive. “The kids loved it, the parents were excited,” Rhee says.

That helped make up for the “burn out” she felt after five years of single-minded focus on getting ADAMM to this point.

The device is now patented and licensed to Health Care Originals, which has further refined the technology so that it can be worn as a flexible patch with a rechargeable battery anywhere on the upper torso, front or back. And not just to monitor asthma, but other respiratory conditions as well. It can even be used as an exercise monitor.

There is one last hurdle before taking it to market specifically as an asthma monitor: A clinical trial to determine whether its use will actually change the teens’ behavior and help them better manage their symptoms.

“It’s an important marketing point,” Rhee says. “Before people spend money to buy this product, they need to know it will work.”

Rhee says she’s gearing up to conduct the trials herself, if necessary.

“It’s my baby,” she says. “Health Care Originals has helped raise this child and give it a new appearance and additional functions. But I need to bring it to point it can be used for what we intended all along.”

To make life better for teens who are wheezing and coughing—and don’t even realize it.