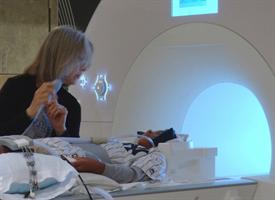 The University of Rochester Medical Center (URMC) is participating in what is being characterized as the largest long-term study of brain development and child health. The study will follow the biological and behavioral development of more than 10,000 children from ages 9-10 through early adulthood.

The Adolescent Brain Cognitive Development (ABCD) Study was created by the National Institutes of Health to evaluate the developmental period during which the brain undergoes dramatic changes. The study will seek to better understand how children’s experiences impact brain maturation and other aspects of their lives, including academic achievement, social development, behavior, and overall health.

“Adolescence is a time of extraordinary physical, emotional, and intellectual growth,” said John Foxe, Ph.D., director of the Del Monte Neuroscience Institute and principal investigator of the URMC ABCD Study. “Yet there is a great deal that we don’t know about how experiences such as participation in sports or music programs, screen time, sleep patterns, and long-term exposure to medications and stimulants impact their transition to adulthood.”

URMC will join with 20 other research sites across the nation, resulting in an expected $1 million boost in federal support per year to the Medical Center over the next 10 years.

URMC will seek to recruit 275 local children to participate in the study. Research participants and their parents will be interviewed by researchers, complete surveys, and the children will perform games and puzzles designed to measure their cognitive function. Every two years, the children will also undergo MRI scans, which will allow researchers to safely and non-invasively collect a detailed image of the structure of their brains.

URMC recently acquired a state-of-the-art Siemens 3 Tesla Prisma MRI scanner that will be used for this project. The Medical Center has also assembled a team of 12 neuroscientists, technicians, post-doctoral fellows, and research assistants to carry out the decade-long study.

“Children’s brains undergo tremendous structural changes during the period of adolescence,” said Edward Freedman, Ph.D., an associate professor in the URMC Department of Neuroscience. “Our hope is that this study will enable us to identify and ultimately predict and prevent developmental problems and understand the protective social and biological building blocks that result in healthy and productive young adults.”

URMC scientists will work closely with the region’s public and parochial schools to identify and recruit children to participate in the study. Elementary schools will be approached by URMC researchers on a rolling basis and information about the study will be sent to the students’ homes. The study has received support from the majority of the superintendents in the greater Rochester region.

“We are excited by the prospect of being involved in this important research project,” said Kathleen Graupman, the superintendent of the Greece Central School District. “Understanding the development of the children who attend our schools will provide incredibly valuable information that, I hope, will someday enrich our educational process and our communities.”

For more information about the ABCD study, visit https://ABCDstudy.org/