On the hunt for asteroids to avoid ‘near miss’

On the hunt for asteroids to avoid ‘near miss’

Every spring, National Near Miss Day is recognized on March 23—a reminder of the day in 1989 when a massive asteroid nearly collided with Earth (for better or for worse, the asteroid was only discovered nine days after its close encounter with us).

In 2013, a group involving Rochester scientists and researchers at NASA’s Jet Propulsion Laboratory proposed building and launching NEOCam, or “Near-Earth Object Camera.” The space-based telescope will look for asteroids and comets near Earth using an updated version of an infrared detector developed by Craig McMurtry, Judith Pipher, and Bill Forrest, all in the Department of Physics and Astronomy.

In 2017, NASA announced that it will extend funding for the NEOCam project. The University of Rochester remains a contributing partner in this effort to identify and understand asteroids and comets throughout our solar system, including any that are Earthward bound. 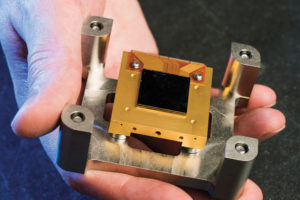 SPACE BOUND? A proposed space mission to look for asteroids near Earth would include a new version of an infrared detector developed and tested by Rochester researchers. (University photo / J. Adam Fenster)

In the ongoing background noise of potential natural disasters vying for your attention—hurricanes, tornadoes, earthquakes, lightning strikes—the idea that a random piece of rock from outer space will cross paths with our lonely blue planet is most likely a distant worry.

And if a project involving a team of Rochester scientists and researchers at NASA’s Jet Propulsion Laboratory in California succeeds, you may eventually be able to rest even easier when it comes to the faint possibility that an asteroid will strike Earth with catastrophic consequences. Or at least put the possibility into the same category as earthquakes and hurricanes—a potential hazard, to be sure, but one that can be predicted and prepared for, if not averted.

“How do you respond to something that’s low in probability but potentially high in consequence?” asks Amy Mainzer, the principal investigator for two JPL missions designed to survey space for asteroids and comets. “You don’t ignore it, but you don’t panic either. You try to take the reasonable, measured response to the situation. In the case of the earthquakes, we certainly study earthquakes; we employ sensor networks to try to detect them.

“In the case of the asteroids, the first thing you want to do is go find the asteroids and see if there are any that are on a potentially hazardous course.”

For much of the past decade, Mainzer and colleagues at Rochester have been collaborating in an effort to improve the ability of space telescopes to map the course of asteroids. The long-term goal is to put in place a network of detection—involving both space-based and ground-based observatories—that will alert observers when asteroids or comets are on a collision course with Earth, allowing disaster professionals the time to prepare a course of action to avert as much of the danger as possible.

This spring, the team of Craig McMurtry, a senior engineer, Judith Pipher, professor emerita, and Bill Forrest, professor emeritus, all in the Department of Physics and Astronomy, along with Mainzer, reported an important breakthrough in that effort. The Rochester team, which has been one of the leading centers of research on infrared detectors for space missions since the early 1980s, reported that a new generation of sensors appears ready to serve as the electronic eyes of a mission designed to hunt for “near-Earth objects.”

With initial funding from NASA, the group is proposing a new space-based telescope that would sit close to Earth’s orbit and use infrared sensors to scan the sky for asteroids whose orbits have taken the interstellar rocks out of the main belt between Mars and Jupiter and put them on a possible collision course with Earth. Named NEOCam, or “Near-Earth Object Camera,” the mission would be able to detect objects that have a diameter of about 30 to 50 meters—about the size of an office building.

While that won’t account for all the objects that have the potential to cause catastrophic damage, it would go a long way toward filling in a wide swath of missing information about asteroids, their orbits, and the materials that they are made of. When such near-Earth objects are relatively small—objects the size of basketballs are estimated to enter the atmosphere once or twice a week—they dissipate harmlessly in the atmosphere.

The larger they get, of course, the greater their potential for destruction. The world was reminded of that last winter when an asteroid estimated to be 17 to 20 meters in diameter entered the atmosphere over the Ural region of Russia and exploded about 30 miles from the city of Chelyabinsk. And in 1908, an asteroid or comet estimated to be at least 50 meters in diameter flattened more than 800 square miles of Siberian forest near Tugunska, Russia. And 65 million years ago, a collision with a near-Earth object believed to be about 5 to 10 kilometers in diameter resulted in the extinction of the dinosaurs.

In 2011, Mainzer published the most detailed census yet of large and midsize asteroids, reporting that the majority of the objects with the most lethal potential—those larger than 1 kilometer in diameter—have been found and that many of the ones measuring between 300 meters and 1 kilometer had been spotted. Part of a project she led called the NEOWise survey, the results were based on data from the Wide-field Infrared Survey Explorer, or WISE, a NASA mission launched in 2009 that was designed to scan for luminous galaxies and stars with a cooler temperature signature.

“There is really no other group that has the experience with this type of array. The Rochester group is the only group that’s ever tested the long-wavelength version of the device, that I’m aware of, for astronomy purposes.”
—Amy Mainzer, NASA Jet Propulsion Laboratory

Like the WISE mission, NEOCam is based on the asteroid-hunting technology of using infrared radiation as a way to spot dark, nonreflective objects. Although invisible to humans, infrared radiation can be used to measure the heat being emitted by an object, making it ideal for searching for objects like asteroids. Asteroids don’t emit their own light, but when warmed by the sun, emit enough infrared radiation to stand out against the ambient radiation of space.

But unlike WISE, the proposed NEOCam mission will be designed to scan specifically for asteroids and other near-Earth objects, and where the longest wavelength detections in WISE were based in silicon, the new sensors would be made of a newly developed combination of mercury, cadmium, and tellurium. The combination allows the sensors—akin to a megapixel camera chip—to collect infrared wavelengths up to about 10 microns, the range at which most asteroids emit infrared radiation.

In a paper published in the Journal of Optical Engineering, the Rochester team reported that the new sensors could operate comfortably at about 40 degrees above absolute zero, the temperature at which most space-based telescopes eventually live out their lives in space. The ability to operate at 40 degrees Kelvin means the NEOCam craft would not have to carry an artificial coolant such as liquid helium or solid hydrogen, a requirement for silicon-based arrays, which operate best at 10 degrees or less above absolute zero.

“It doesn’t sound like a big difference—they both sound really cold—but to an instrument astronomer working on space telescopes, it’s night and day,” says Mainzer. “With these new detectors we can get away with not using cryogen to keep them cold. The benefit is that they can enable the mission to have a very long life. And if you’re patrolling for asteroids, you want to be built to last.”

Pipher and Forrest started working on sensors with the new combination of materials nearly 20 years ago, when they saw the sensors’ potential for operating at higher temperatures.

“Our partners at Rochester have pioneered using and developing these kinds of long-wavelength detectors,” says Mainzer. “There is really no other group that has the experience with this type of array. The Rochester group is the only group that’s ever tested the long-wavelength version of the device, that I’m aware of, for astronomy purposes.”

The new work is part of long history for the Rochester team, which also developed a sensor to measure infrared radiation of a different wavelength that’s currently aboard NASA’s Spitzer Space Telescope, which was launched in 2003 and continues to operate, even though its cooling system has run out.

The Rochester team worked with the space instruments company Teledyne Imaging Sensors to develop and test the new sensors. If all goes as planned, the new detectors will be capable of capturing 16 megapixels of light and will be paired with a complement of sensors at a shorter wavelength to allow for more precise measurement of asteroids.

While the mission has more NASA approvals to get through before a launch date can be set, the team envisions that, over time and with further development, the ability to make such measurements eventually could add up to a more advanced system for keeping track of asteroids that’s analogous to the National Oceanic and Atmospheric Administration’s efforts to track hurricanes and other storms. As science gets better at detecting asteroids and tracking their orbits, a warning system could be put in place that gives people more options for dealing with potential impacts. For larger impacts, trying to divert the objects might be possible. For smaller objects, a future system could provide enough warning for people to get out of harm’s way.

“That’s what science has done,” Pipher says. “We’ve invested in the NOAA to make this prediction and to track hurricanes, and they’re very good at it.”

Says McMurtry: “The same thing will be true one of these days for asteroids.”