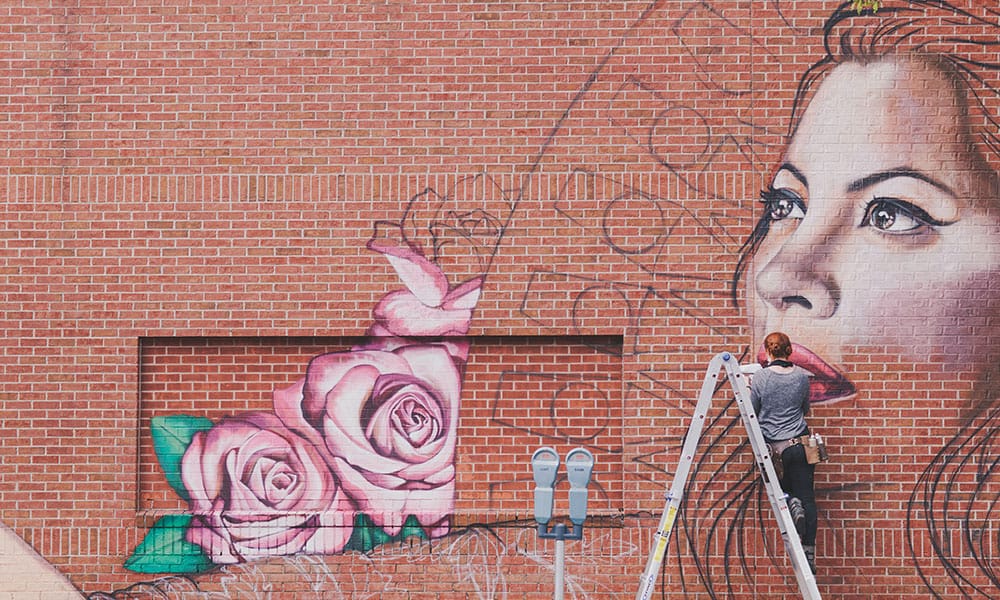 Sarah C. Rutherford, painting one of the murals in the “Her Voice Carries” art project. Rutherford is this year’s Lillian Fairchild Memorial Award, given each year to a Rochester-area artist, writer, choreographer or composer for commitment to the community. (Lives Styled photo / Hannah Betts)

When artist Sarah C. Rutherford painted a mural of Susan B. Anthony in the tunnel system under Dewey Hall in 2015, the seed of an idea was planted.

“It made me think about Anthony’s legacy, and I wanted to translate that to the larger community,” Rutherford says.

So began the project “Her Voice Carries,” which has earned Rutherford this year’s Lillian Fairchild Memorial Award. The award has been given for more than 80 years to a Rochester-based visual artist, writer, choreographer or composer for commitment to the community. Born and raised in Boston, Rutherford has called Rochester home for the last decade.

A tribute to five Rochester women who work to lift others’ voices in the community, the project includes five murals, one in each of the city’s quadrants and another in Center City. Each mural depicts one of the women and is painted in a location appropriate to her community work. The Fairchild Award specifically recognizes “Her Voice Carries: Prelude,” an installation at the Memorial Art Gallery that points viewers to the other paintings and unites all five women in a single mural.

The award was presented to Rutherford on March 8. At the presentation ceremony, Rosemary Kegl, chair of the English department, called the museum exhibition “compelling in itself and as testimony to the extraordinary originality of the larger ‘Her Voice Carries’ project.”

Kegl headed the award committee, whose members also included Jonathan Binstock, the Mary W. and Donald R. Clark Director of the Memorial Art Gallery; Roger Freitas, an associate professor of musicology at Eastman; and Paul Duro, a professor in the Department of Art and Art History.

The women depicted in Rutherford’s murals are involved in a range of community issues:

Rutherford says receiving the award is particularly gratifying because recognition of her art is also recognition for the work of the women. “It’s a chain,” she says. “I feel like I’m the conduit for this project, not the only author.” In addition to her collaboration with the women depicted, Rutherford is also carrying out the project with the aid of two young artist apprentices, Charisse Warnick and Maribel Hernandez, and a project assistant, Elizabeth Lenz. 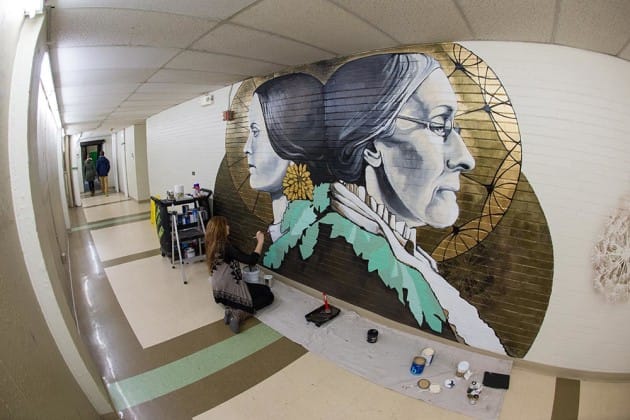 The Her Voice Carries project was inspired by a mural of Susan B. Anthony that Rutherford painted in the River Campus tunnel system in 2015. (University of Rochester photo / J. Adam Fenster)

“Sarah is more than just a terrific talent and mural painter, and her work goes beyond beautifying walls and places,” says MAG director Binstock. “Through art she brings people together, she brings communities together, and for this she deserves extraordinary recognition.”

Rutherford hopes to expand the project beyond Rochester, to highlight women’s work for their communities in other cities, as well.

This spring, she is teaching Introduction to Painting and Advanced Painting for the University’s studio art program. In the latter course, she’s giving students a taste of mural painting.

The murals of “Her Voice Carries” range from large (70 by 20 feet) to immense: Olear’s mural on the Charles Settlement House reaches five stories high. That kind of visibility is important, says Rutherford. Murals are “accessible to all—they’re not based on someone owning the art.”

And once completed—a process that takes Rutherford from two to six weeks—they become part of the urban landscape.

“Murals work their way into the fabric of people’s daily lives,” she says.