Four-time Emmy Award-winner Maria Hinojosa says “it’s pretty surreal” to be delivering the MLK Commemorative Address at the University of Rochester this week. She calls Martin Luther King Jr., her “first American hero, the first person who made me believe I had a voice in this country.”

Hinojosa will deliver the annual address in Strong Auditorium on Friday, January 19. The 6 p.m. event is free and open to the public. It can also be viewed live online.

The MLK Commemorative Address was instituted in 2001 to promote diversity, freedom, civil rights, and social justice. It’s co-sponsored by the Office of the President and the Office of Minority Student Affairs.

You were born in Mexico, but moved to Chicago at age one. What was it like growing up as 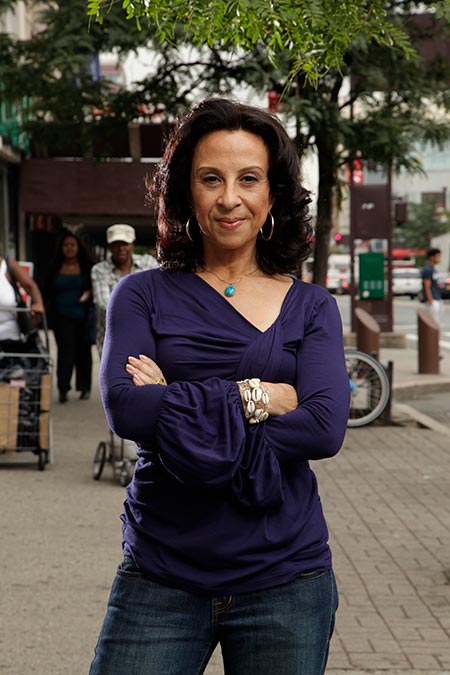 Maria Hinojosa will deliver the annual address in Strong Auditorium on Friday, January 19. The 6 p.m. event is free and open to the public. It can also be viewed live online.

part of a Mexican immigrant family in Chicago in the 1960s?

I grew up in Hyde Park on the south side of Chicago in the 1960s, and it was a wonderful childhood. Our neighborhood was a multicultural Utopia.

I was born in Mexico, but came to Chicago when I was one. My family was all Mexican immigrants. Our best friends were African-Americans, Japanese-Americans, Chinese, and Jewish. But we were the only Latinos. We thought it was normal. When you’re a little kid, you think your reality is the normal reality.

You’ve said in the past that your father loved to read the papers and watch TV news programs. Do you remember being well-informed at an early age?

My father was a news junkie. He read a lot, and the TV and radio were on all the time. But there was never a story about Latinos. Never. I felt invisible.
That invisibility led to me becoming a journalist. Part of me said, “We’re here. We’re part of the American experience.”

As a pioneer for Latinos in several newsrooms, did you still feel invisible?

I was the first Latina in many newsrooms, including at NPR and CNN, and I could have allowed myself to feel invisible again. But I had attended amazing schools and college. I spoke multiple languages. I wasn’t destitute. It allowed me to overcome my sense of being uncomfortable. I had a voice and a responsibility.

Tell us about the beginnings of Latino USA in the early 1990s.

We launched Latino USA in 1993—one of the earliest public radio programs devoted to the Latino community. NPR thought, “What a nice show. It might be around for a year or three.” We’ve been around for 25. There’s more hunger for this show, on 125th Street in the heart of Harlem, than there was 20 years ago. Our audience grew by 43 percent last year. That’s ridiculous! And it shows the quality of the work.

You’ve said you saw Martin Luther King speak at an early age, and he gave you hope. How old were you, and what were the circumstances?

Martin Luther King Jr. was my first American hero, the first person who made me believe I had a voice in this country. I was seven, and my mom pulled me and my siblings out of school one day to attend a rally in our neighborhood in support of King. It was life changing. We understood the civil rights movement had affected us as Mexicans.

Where are we in terms of the progress that Martin Luther King dreamed about?

How I would respond depends on the day. On my good days, it’s one of the most exciting times in American history. We’re naming things and hashtagging things—#metoo and #timesup—and calling out white supremacy and sexual assault in the work place. But on my bad days, I worry about the state of our democracy. I worry about our intelligence agencies and how they could have missed a foreign country being so involved in our domestic affairs. And I worry about human beings in mental anguish because they don’t know if they will be allowed to stay in America.

There are students of color everywhere who feel they’re invisible and that their perspectives are ignored or discounted. What would you say to them?

What does it mean to you that you will delivering an MLK commemorative address a half century after King became your hero?