How did critical theory—a major area of inquiry for humanities scholars and social scientists in the late 20th century—pivot from a narrowly focused investigation of meaning and text to a broad engagement with culture and politics?

That question is at the heart of The Ethics of Theory: Philosophy, History, Literature (Bloomsbury, 2017), a new book by Robert Doran, a professor of French and comparative literature. He examines iconic 20th-century philosophers, including Jean-Paul Sartre, Michel Foucault, Jacques Derrida, and Richard Rorty, as well as influential literary and cultural theorists, such as Claude Lévi-Strauss, Erich Auerbach, Hayden White, René Girard, and Edward Said.

Doran’s own education influenced his selections. He studied under, or attended seminars with, four of the nine theorists about whom he writes: White, Girard, Derrida, and Rorty.

He could have titled his book “How Theory Became Ethics,” he says.

Once “denounced as amoral, nihilistic, and quietist, due to its ‘relativist,’ ‘textualist,’ and ‘anti-subjectivist’ bent,” critical theory also became “the source of the ‘political turn’ in the humanities as well as a wellspring for liberal activists,” he writes.

Critical theory is a philosophical approach to understanding culture and society. Interdisciplinary in its areas of inquiry, it’s particularly concerned with how people form knowledge and the kinds of power that underlie these formations. The groundwork for critical theory was laid by thinkers such as Immanuel Kant, with his considerations of how the mind structures knowledge, and Karl Marx, through his critique of capitalist culture. Intensely concerned with language and written texts, critical theory later became socially engaged, as well, in what Doran calls its political turn. 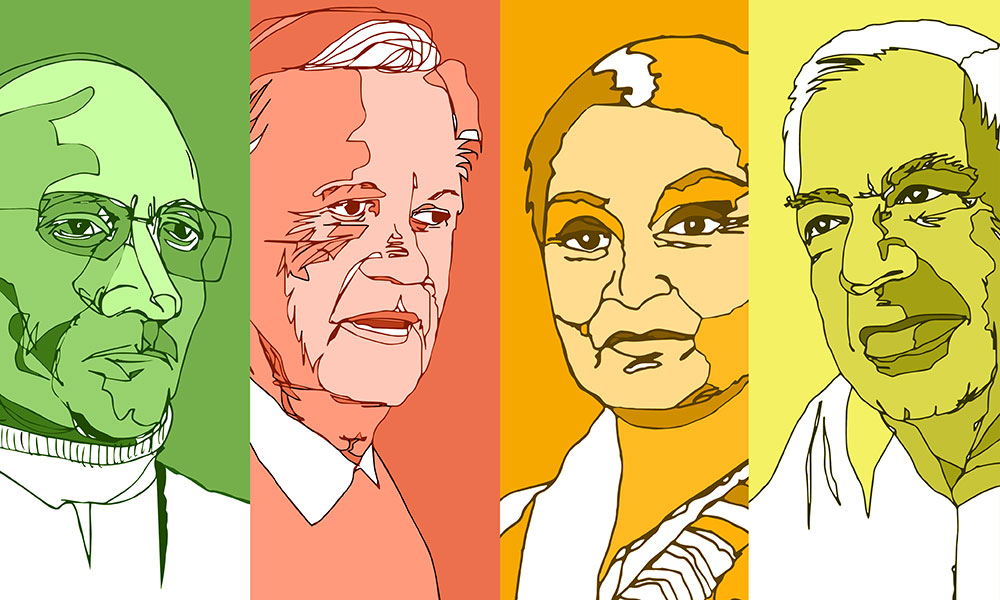 Doran locates critical theory’s emergence in 1960s France, with the early writings of philosophers Foucault and Derrida—“two figures who have reconfigured the intellectual landscape in ways that are still being felt,” he writes. They did so in part by making Continental thought—especially the thought of German philosophers Friedrich Nietzsche and Martin Heidegger—more relevant to the broader humanities and social sciences.

By the late 19th century, scientific inquiry had taken philosophy’s place in popular regard as the most elevated form of knowledge. Nietzsche and Heidegger challenged the magisterial presumptions of theoretical knowledge, arguing that the only knowledge attainable is interpretive—contingent and perspectival, rather than universal and ahistorical. This contention is at the root of what became critical theory.

In the United States and Britain, critical theory found a place in literature departments, where the path had been paved by New Criticism, a method of literary criticism based on the idea that meaning is found within texts themselves, not in external contexts, such as the author’s life or social history.

For French philosophers in the ’60s, the main intellectual action was in structuralism, which approaches systems as the internal relation of their parts. In the 19th century, Swiss linguist Ferdinand de Saussure developed the field of structural linguistics—language, he argued, was a system built from the relationships between different kinds of linguistic signs. His work came to wider attention in the 1950s, when Claude Lévi-Strauss used it to develop “structural anthropology.”

Just as American scholars were taking up structuralism, Derrida delivered a paper at a 1966 conference at Johns Hopkins that is widely regarded as “the birth of Theory,” Doran writes. In “Structure, Sign, and Play in the Discourse of the Human Sciences,” Derrida offered a critique of structuralism that opened the way to poststructuralism, or “deconstruction,” as it has come to be known. Interest in deconstruction reached a fever pitch in the 1980s. And then, dramatically, “the fever broke in 1987,” Doran says.

That year brought two scandals: disclosures about Heidegger’s connections with Nazism in the 1930s and the discovery of early anti-Semitic writings by the eminent deconstructive critic Paul de Man.

The revelations created a crisis for the basic orientation of critical theory. “Heidegger never apologized for his Nazi connections, never said anything about the Holocaust, was just completely silent about the whole thing,” Doran says. “So you have Heidegger’s silence and de Man’s silence. And people were beginning to ask, what about the silence of the whole poststructuralist movement—isn’t that a problem? Where is the ethics in it?”

Out of that crisis came what Doran terms the “ethical turn” of critical theory. It was ushered in by critic Gayatri Spivak, who had studied under de Man at Cornell. She had also translated and introduced Derrida’s most important work, Of Grammatology, a book that became required reading in US departments of English starting in the late 1970s and early 1980s. But with her landmark 1988 essay, “Can the Subaltern Speak?”—a consideration of power and its accessibility—Spivak helped to establish the field of postcolonial studies and thereby contributed to the introduction of an ethical and political dimension to critical theory. This effectively ended the “textualist” phase she herself had inaugurated with her translation of Of Grammatology.

“… and people were beginning to ask, what about the silence of the whole poststructuralist movement—isn’t that a problem? Where is the ethics in it?”

The significance of the ethical subject, and of the author figure, which had been sidelined with the singular focus on the text, came roaring back into play. “Personal experience and group identity become an index of theoretical authenticity. The death of the author gives way to a new kind of ‘authority,’” Doran writes. “The fact that Derrida was a Jew born in (French) Algeria and the fact that Foucault was a homosexual, facts that were considered philosophically irrelevant in the 1960s and 1970s, suddenly became salient after the political turn.”

So emphatic was the turn that it obscured critical theory’s origins: “The transformation of Theory into an ethico-political discourse was so sudden, successful, and complete that it now appears to many as if Theory had always been conceived or understood as a socially committed or activist discourse,” Doran writes.

He argues that understanding theory’s evolution is critical. “A lot of people think of theory as a kind of toolbox” for scholarship, he says. “You take this and you take that [mode of analysis]—you take whatever seems to work for you. But these ideas came about at a particular time and have a particular meaning. You can’t just take them willy-nilly out of context, and that’s what I try to rectify, to some extent, in this book.”

Since its heyday in the 1980s, critical theory has moved from center stage for scholars. But it hasn’t disappeared, and Doran argues that it remains crucial. It has “become synonymous with the ethical and political questions that agitate our times,” he writes. His book, he says, is an “endeavor to understand how this happened.”