Making the world a healthier place

Making the world a healthier place

“If all of us would walk out of our cubicles and face big issues collectively, just imagine how much we could do for this world.”–Chunlei Guo

Chunlei Guo is an optical physicist and professor at the University of Rochester’s Institute of Optics. Ten years ago, he says, he was a stereotypical academic scientist. He could stay in his lab and spend hours trying to figure out the meaning of an electron when it moved just two degrees to the left or veered ever so slightly to the right. He could easily be consumed in this work.

Years of support have helped Guo and his research team develop some truly innovative technology: an extremely water repellent, or “superhydrophobic,” metal surface that self-cleans. It does so by seeming to “push” the water away from the surface, making water appear to bounce off the metal surface (watch this video).

The potential applications for superhydrophobic technology are vast.

For instance, it could be used by the airline industry for de-icing. Or, it could eliminate the need to ever de-ice planes again. It could also be used to prevent corrosion and rust. This could be significant in the oil industry, where a failure in an oil pipeline could have a catastrophic environmental impact. Applying superhydrophobic surfaces in critical parts of the oil pipeline could dramatically reduce the risk of a major adverse event. 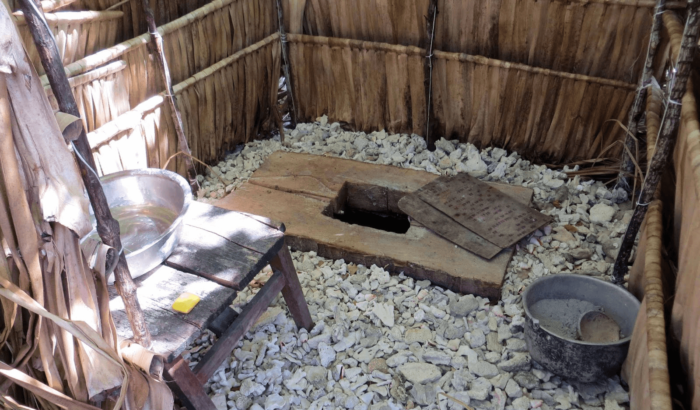 A latrine in Africa

Consider this: 35 percent of the world’s population doesn’t have adequate sanitation facilities. The results are nearly 300,000 diarrheal deaths every year  linked to cholera, dysentery, hepatitis A, typhoid, polio, and more. Guo’s superhydrophobic, self-cleaning surfaces could change these numbers by revolutionizing waste management, especially in developing countries.

With Guo’s new grant funding, he and his team will partner with the China-based Changchun Institute of Optics, Fine Metals, and Physics to develop a prototype system that they will deploy and field test in an African community. The system will include a modular fecal-phobic treated plastic drop hole liner with trap door and solid waste, wet waste, rain water, and cooling systems that use Guo’s superhydrophobic technology, which can actually self-clean.

“Our system will provide a sanitary experience while being cost-effective and easy to install and will not require external energy or sewage systems,” Guo added.

For Guo, there’s a personal connection to this work. Growing up in a small rural town in China, he only had access to public latrines, which didn’t have running water or provide any lighting. The nearby access road didn’t offer any illumination either. Thus, it was particularly unpleasant to access after dark. Guo vividly remembers his father walking him to the latrines as a little boy. Back then, he said, they didn’t know anything better.

Although most people living in developed countries can’t relate to the unsanitary conditions that nearly 2.5 billion people around the world deal with daily, Guo can. It informs and it inspires his work.

Guo quietly reflects on the potential impact of his work and says, “One day not long ago I asked myself, ‘Should I just go back to my own world and continue on research that fascinates only myself? Or should I push myself and do the daunting task of tackling the global issues?”

Fortunately, Guo has chosen the latter, and is helping to make the world a healthier place.

In this TedX Indianapolis presentation, Chunlei Guo talks about metals, how they’ve been used throughout history, and how they’ve served the same purpose over many years. Guo delves into how we can alter materials like metals using optics and lasers to preserve water, prevent environmental disasters, increase transportation efficiency, and improve sanitation around the world.

In the fall of 2017, Chunlei Guo, PhD,  a professor with the University’s Institute of Optics, and Kirsi Jarvinen-Seppo, MD, PhD, Founders’ Distinguished Professor of Pediatric Allergy and an associate professor associate professor of pediatric allergy/immunology and allergy/immunology and rheumatology, were recently awarded separate $1.5 million grants from the Bill & Melinda Gates Foundation, which is the largest private foundation in the world. These are the largest grants ever awarded in the University’s history from the foundation.

Both Guo’s and Jarvinen-Seppo’s research is focused on finding much-needed solutions to global problems, such as illness and mortality, both of which are associated with poor sanitation and nutrition. Jarvinen-Seppo, a pediatric allergist and immunologist, is leading a team from five centers with samples around the world to explore whether breastmilk can offer infants protection from key infectious diseases.

In addition to these grants, the Bill & Melinda Gates Foundation has awarded three other $100,000 grants to University faculty in recent years. These grants support a family of initiatives that foster innovation to solve key health and development problems around the world. Biology professor John Jaenike received two (2010 and 2012) for his research to help protect crops from pests without using toxic chemicals in the process. In 2008, biochemistry and biophysics professor Harold Smith received a Gates Foundation grant for innovation in HIV/AIDS drug discovery.

Support Life-Changing Research
To learn more about how you can support life-changing research like this, contact Stephen A. Dare, senior associate vice president for University Advancement, at (585) 275-7530.