Tiffany Taylor Smith ’91 was raised in Dayton, Ohio, and attended high school in the predominately white suburb of Kettering, Ohio. Growing up, her parents encouraged her and her siblings to get involved in whatever they could. From softball to Girl Scouts to school plays, they did it all, and it never mattered that they were usually the only black children there.

Being at ease with all types of people came to Taylor Smith at an early age. She credits cultural curiosity as a key aspect of her outlook, contributing to a 25-year career in corporate and academic worlds, where she focused on building diverse and culturally inclusive communities. 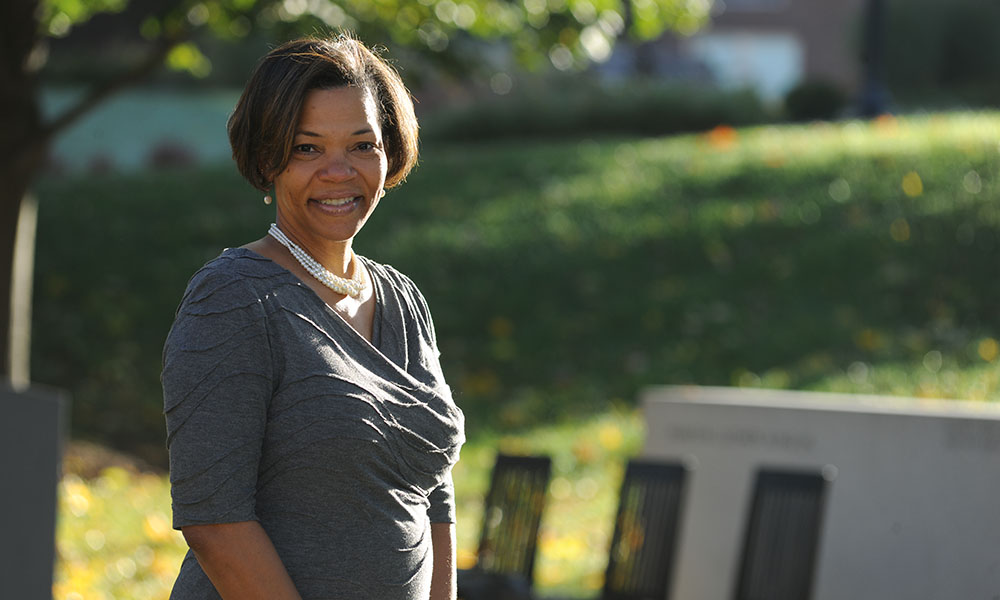 Tiffany Taylor Smith credits her and her family’s cultural curiosity with piquing her interest in building diverse and inclusive communities. (University of Dayton photo)

This fall, Taylor Smith was named the University of Dayton’s inaugural executive director for inclusive excellence, education, and professional development. Returning to her native city, she oversees an effort to promote and enhance intercultural competence, diversity, equity, and inclusive excellence at an institution that has 2,600 full-time and part-time faculty and staff, and more than 10,000 students.

How do you define your new role?

I create and facilitate professional development programs for faculty and staff around diversity, equity, and inclusion. We’re lucky—Dayton’s been actively engaged in this work for a while. What we need to do now is to coalesce efforts from across every academic and nonacademic unit.

What was the catalyst for this new position?

Dayton’s leadership is one reason. Eric Spina became our president in 2015, and my boss, Larry Burnley, joined in 2016 as Dayton’s first vice president for diversity and inclusion. Both leaders were already champions of diversity and inclusion. Another reason I was drawn to Dayton is because of our commitment to the “common good.” This principle is rooted in our Catholic Marianest values, which are based on the idea of an education grounded not just in the faith but also in service and justice and change. That reminds me of Rochester’s commitment to Meliora. Growing our diversity and inclusiveness programs aligns perfectly with doing what best is for all.

How do you define diversity and inclusion?

Diversity is about what we bring to society. Our race, gender, sexual orientation, and anything in our background, history, or physical make-up add to who we are—they don’t take anything away. Diversity is about our individual uniqueness and our multiple dimensions.

Inclusion is action oriented. It’s about helping people feel authentically welcomed and valued. I often say inclusion is like this great big house where anyone can open the refrigerator, use the bathroom, or get a cup from the china cabinet. All those inside have equal access to everything.

Why are diversity and inclusion important?

We live in a very interesting time. So many people are seeing that the status quo isn’t serving anyone any more, that we have to address racism, sexism, ethnocentrism, and other key issues. We can’t place value on our differences—we must embrace them and see that, at our core, we all share something essential: our common humanity.

How did being a Rochester student influence you?

My eyes really opened up in college. I was part of the Black Students’ Union, a resident advisor, and always looked for ways to help people to get to know each other, get along, and see the best in the other person.

It was at college when I also met Dr. Paul Burgett ’68E, ’72E (PhD), who was dean of students when I was a psychology student and is now vice president and senior advisor to President Joel Seligman. I’ve stayed in touch with him for 25 years. I remember that he always called his students “Dr.” So to me, he’d say “Dr. Taylor.” No one had ever addressed me like that before. In his eyes, we all could see what he thought we could become. That was so empowering. This is what I want for those I work with to see—that we each have great potential and capacity to learn, grow, and work together. And, interestingly, I’m actually planning to start my doctorate in educational leadership in the fall.

Stamped from the Beginning: The Definitive History of Racist Ideas in America by Ibram X. Kendi and Tribes by Seth Godin.

“Both are excellent. Kendi, who recently established an institute on racism at American University, offers such an informed perspective, and Godin’s book is an all-time favorite. It’s about finding community.”

Connect with us
Learn about ways to engage with us including volunteer opportunities, events in your area, and more here.