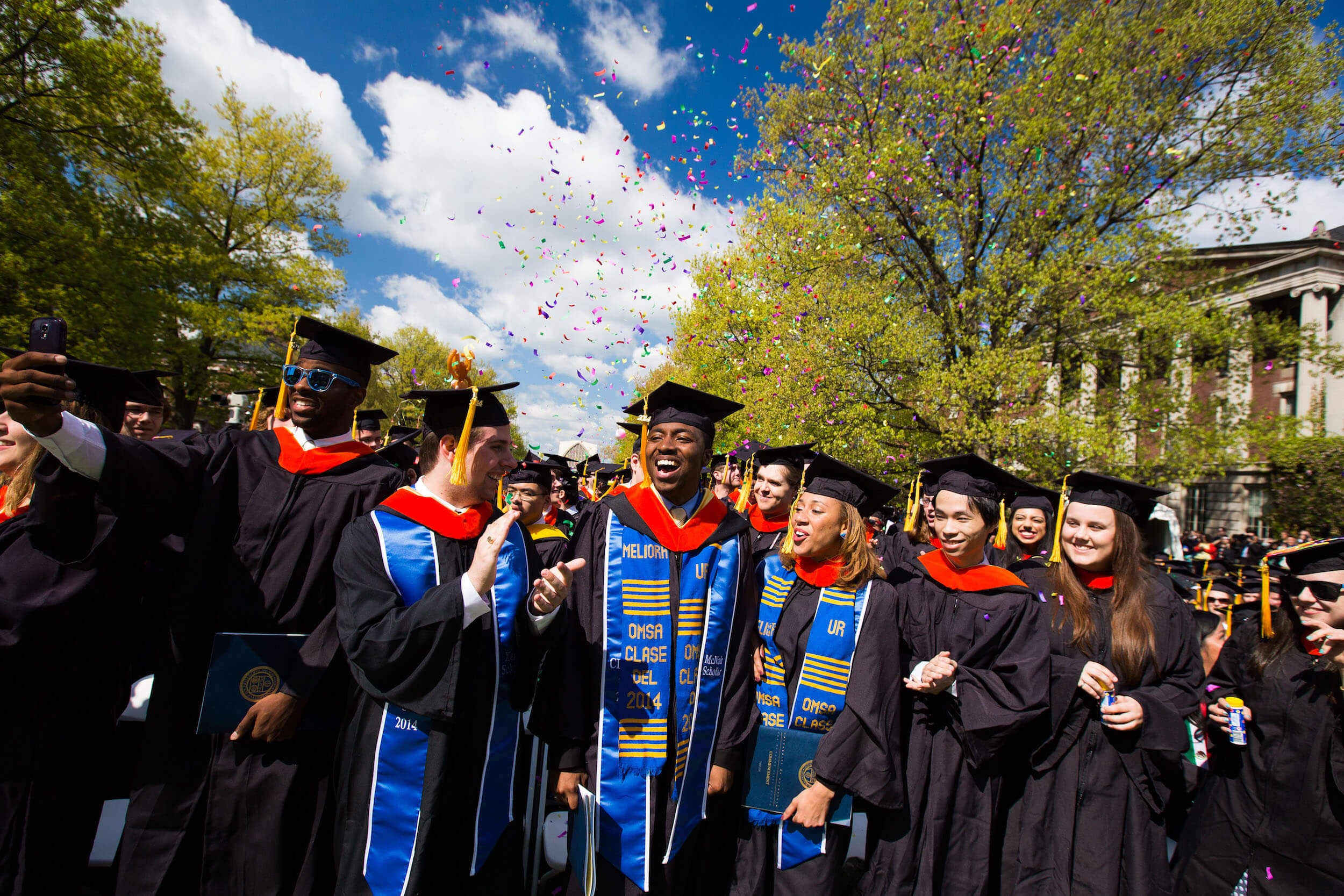 Pursuing their passions: Meet the Class of 2021

Pursuing their passions: Meet the Class of 2021

More than 1,400 first-year University students began their college journey when classes started Wednesday on River Campus. They come from 105 nations and 42 states, and they all have a story. Here are six of them. 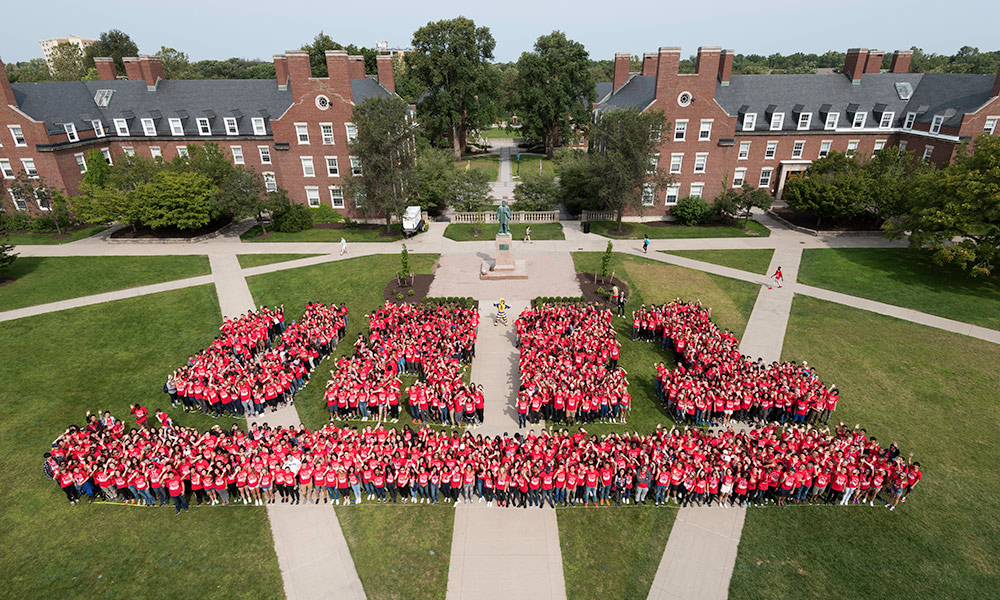 The incoming Class of 2021 poses for a group photo on the Residence Quad before classes begin for the fall semester. (University photo / J. Adam Fenster)

“I was part of a live-action role playing club back home,” says Jason Katzner. “In Central Park, we would dress up as medieval fantasy swords and sorcery characters and go on quests and fight each other.”

He’d like to start a similar club at Rochester.

Katzner is enrolled in the GRADE program, a partnership between College Admissions and the Warner School, which offers students interested in K–12 education a scholarship and a five-year path to a bachelor’s degree from the College and a master’s degree from Warner.

Katzner, who hopes to become a high school computer science teacher, grew up attending tech camps, founded a computer science club in high school, and volunteered with an international non-profit that teaches children how to design and modify board games.

He heard about Rochester from a college adviser.

“When I looked at the curriculum, I fell in love,” he says. “I’m really looking forward to meeting people from all walks of life.”

“When I’m awake, I can dream just as well as when I’m asleep,” says Abi Liebhart. “I visualize how I’d like things to be and create scenarios in my mind.”

Although she enjoys activities from paddle boarding to reading, nothing excites Liebhart more than art.

“I love to paint, draw, and sculpt,” she says. “My specialty is people, especially faces. I try new things to create anything that pushes the boundary.”

A Handler Scholar, she plans to explore both studio art and digital media studies—and to try out for one of the student a capella groups. When she leaves here in four years, she says she hopes to accomplish three goals:

“To provide for my family, to feel successful, and to be happy.”

Michael Lin is a published poet. “I love to be creative,” he says.

Lin’s parents moved from China to Queens two months before he was born. His father died when he was in sixth grade, and he has  lived with his mother, sister, and grandmother. He says being a Handler Scholar has made a huge impact.

“Any burden I can take off my mom is a plus.”

Lin, who is thinking of pursuing majors in both English and business, ran track in high school, and is also interested in rowing and squash. Basically, though, he’s just eager to get started with college.

“My friends have been telling me they’re worried or fearful, but I’m ready to dive in,” he says. “I want to take every advantage offered to me.”

“I love the sound of motors,” says Coline Reinhardt. “Every time I hear a V12 coming, I have to turn around to see what car it is.”

She shares her passion for cars with her father. He recently bought her a 2008 Ford Mustang, which she will restore.

Reinhardt is from France, but moved last year outside of Allentown, where her father is overseeing the construction of a food factory. Looking to complete her international baccalaureate degree, she found the French-American School of New York in Larchmont and lived with a host family.

She wanted to continue her education in the United States, and her high school counselor said Rochester would be a good fit. Reinhardt, who’s interested in mechanical engineering, plans to join the Society of Women Engineers, the Baja SAE club, and maybe a few more.

“Horse riding, soccer, ballet dance, hip-hop, volleyball, acting, boxing . . . it will be tough to choose,” she says. “Being able to join so many clubs just doesn’t exist in France.”

“It’s funny and random and attracts people’s attention,” she explains. “The purpose was to create a safe environment after school where students could come if they didn’t want to go home yet. I want to start one here, too. We can have cookies, look at yodeling videos and look at goats.”

Sundine, who grew up in Minnesota, is named after her father, Jeremiah, who died when she was 2. When she was 16, her mother died, sending her and her four younger siblings to the Rochester area to live with their aunt, uncle, and cousins. Sundine says she may not have even pursued college if she weren’t selected as a Handler Scholar last March.

“I never had the financial resources,” she says. “It was the best thing that could happen to me.”

An avid dancer who also enjoys competitive math, Sundine is interested in studying brain and cognitive sciences, with an eye toward earning a doctoral degree and researching drug and alcohol addiction.

While at Rochester, she plans on joining the dance performance ensemble Louvre, among other clubs.

“I was on Common App and meant to click on the University of Richmond, but clicked Rochester instead,” she says.

About halfway through the application, she realized her mistake, but also something else:

“I realized I loved everything about this place, especially the open curriculum, and I decided to apply.” She paid a visit to campus last March.

She says Hoover, a suburb of Birmingham, Alabama, is “completely different” from Rochester, but that’s OK.

“The weather’s different, the food’s different, and the people are different. I love that Rochester has diners on every corner. All of that is so strange to me, but I absolutely love it.”

Some things are more familiar.

“I was completely shocked by the Southern hospitality that everyone on campus has,” she says. “Over and over, Rochester stole my heart when I least expected it.”