Playing saxophone while in brain surgery

Playing saxophone while in brain surgery

This Music Teacher Played His Saxophone While in Brain Surgery

Medicine, Music, and Mapping
Imagine being told that you have a brain tumor and that removing it could take away or damage what you are most passionate about—your musical abilities. This is Dan Fabbio’s story. 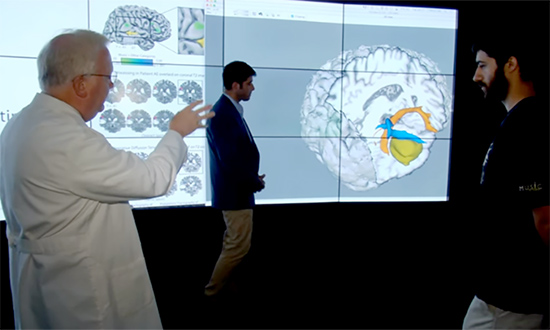 Fabbio is a saxophone player from New Hartford, New York. He lives for music and for teaching. Two years ago, when Dan was just 25, he was diagnosed with a brain tumor. Although it was likely benign, the tumor was growing, causing seizure, and had to be removed.

Brain surgery is always complex. But for Fabbio, it was especially so because the tumor happened to be located in the part of the brain that affects and controls his musical ability.

Dr. Web Pilcher, chair of URMC’s Department of Neurosurgery, collaborated with Brad Mahon, an associate professor in the School of Arts & Sciences’ Department of Brain and Cognitive Sciences (BCS). Together, they did some extraordinary brain mapping using functional magnetic resonance imaging (fMRI) technology to make the surgery safer.

No other institution anywhere in the world is doing the kind of personalized brain mapping that URMC and its Program for Translational Brain Mapping is doing. Pilcher and Mahon wanted to be sure Fabbio did not lose his musical ability following surgery.

To help ensure this, Mahon reached out to Elizabeth Marvin, a professor of music theory at the Eastman School of Music (ESM) who is also a BCS faculty member studying music cognition. Marvin was involved in developing cognitive music tests for Fabbio that were used during fMRI scanning and during surgery. She was present in the operating room to evaluate Fabbio’s music abilities and give Pilcher real-time feedback about the patient’s ability to perform various cognitive music tests.

After about six hours of surgery, Fabbio’s tumor was successfully removed and his musical ability remained intact. The surgical team knew the surgery was a success almost immediately, as Fabbio was able to play the saxophone while they were operating.

Laying on his side during “awake” surgery, Fabbio played the Korean folk song that he and Marvin had selected prior to the surgery. The music played much to the delight and applause of everyone in the operating room.

Today, Dan is healthy and back to playing and teaching and doing what he loves in life.

This story is the first in a series about brain mapping and how it can help save lives and livelihoods, from musical talent to mathematical ability and more.