The East High School Student Spaceflight Experiments Program (SSEP) will see their project lift off on the SpaceX CRS-12 rocket on Monday, August 14, at 12:31 p.m. The rocket, blasting off from Cape Canaveral Air Force Station, Fla., will carry the East SSEP science investigation to the International Space Station (ISS).

Last fall, the Student Spaceflight Experiments Program had students across the nation compete to create 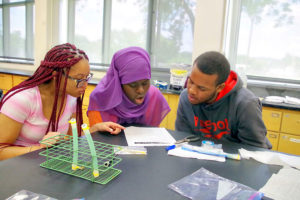 research proposals to test the effect of microgravity and have those proposals vetted by a review board. As part of a school-wide effort, students at East worked in groups to develop their experiments and presented their proposals to a local review board. The chosen East experiment was designed and implemented by De’aunte Johnson, Binti Mohamad, and Tailor Davis. The students’ teacher was Mary Courtney, a chemistry teacher and SSEP community project director at East. East was one of only 21 schools across the U.S. and Canada selected to have their science experiments take part in “Mission 11” to the ISS.

The experiment, entitled “The Effect of Microgravity on the Deterioration of Chlorophyll in Phytoplankton,” was designed to test how quickly chlorophyll will degrade due to microgravity conditions. Students ultimately hope to learn how organisms, in this case phytoplankton, are able to survive in space without sunlight or gravity. 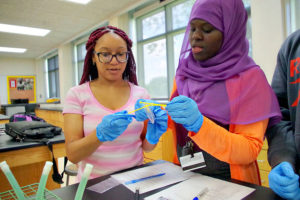 The experiments had to follow strict constraints, with one of those constraints being that the experiment must fit into a very small container called a Fluid Mixing Enclosure (FME). East students used an FME containing a cyanobacteria called spirulina that will not be manipulated aboard Mission 11. While spirulina—a type of a phytoplankton—is an important source of oxygen, it’s also a microscopic marine organism that’s at the bottom of the food chain, and it can also be eaten directly as a human food. It’s also small enough to fit in an FME. The experiment will spend at least six to eight weeks in orbit before returning to East, where students will then complete a final analysis of their experiment.

As controls, the students will mimic these same procedures in ground experiments in their classroom at East. When the space experiment FME returns to Earth, it will be sent to the East student scientists for comparison with their control samples.

This is the second time a student experiment from Rochester, N.Y. is going up with the SSEP. Courtney initially challenged her students to think about their research and how it would have real-world applications because this could be real science and it could be something that another scientist builds on in the future. Since then, students have learned valuable skills, like how to be inquisitive and how to really dig into a project and something they know nothing about. According to Courtney, these skills they are learning—how to research, synthesize, and be critical—will take them far.

“Everything that we’re trying to do here at East under the University of Rochester partnership, in terms of turning the school around, is all research based,” says Courtney, “such as what are the best practices in education? I think when you take a science project like this and show kids how it can have real-world applications and involve them and really immerse them, it really builds on everything that we’re trying to do and it reinforces the whole U of R research philosophy.”

For the East students, that immediate science need and real-world application is global warming.

“Sooner or later, we’re going to have to leave this planet,” says former East senior Johnson who took the 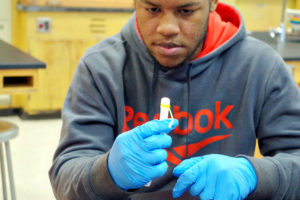 lead on preparing the research proposal and served as the project’s principal investigator. “But we have to have a plan in place—we need oxygen, we need plants, and we need food. If we can figure out the oxygen part first, we can work on the other parts subsequently.”

East received $24,000 in funding from the Rochester Area Community Foundation, Farash Foundation, Praxair, Inc. (an industrial gas company in Buffalo, N.Y.), the University of Rochester, and Subaru USA to help support this school-wide initiative that has impacted students across multiple grade levels at East.

The Student Spaceflight Experiments Program (SSEP) is a program of the National Center for Earth and Space Science Education (NCESSE) in the U.S. and the Arthur C. Clarke Institute for Space Education internationally. It is enabled through a strategic partnership with DreamUp PBC and NanoRacks LLC, which are working with NASA under a Space Act Agreement as part of the utilization of the International Space Station as a National Laboratory. SSEP is the first pre-college STEM education program that is both a U.S. national initiative and implemented as an on-orbit commercial space venture.

On July 18, East students packed up and sent off their sample to NASA. Watch the video of East students preparing their experiment here or at: www.youtube.com/watch?v=ugyMbYc9gHw.  Like the East High SSEP Facebook page for the latest project updates.

For updates on Mission 11, click here or visit: http://ssep.ncesse.org/current-flight-opportunities/ssep-mission-11-to-the-international-space-station-iss/.

About the University of Rochester/East EPO Partnership
The University of Rochester, as the Educational Partnership Organization (EPO) for East High School, has assumed full management responsibilities for East, effective July 2015. The new East (http://www.rcsdk12.org/east) consists of a Lower School (grades 6-8) and an Upper School (grades 9-12), and aims to prepare all students for a successful transition into adulthood. A comprehensive community school with a robust set of services to support its diverse students, East offers a strong academic and career preparation program, including a daily advisory program and a full complement of athletic and extra-curricular activities that support and engage students.