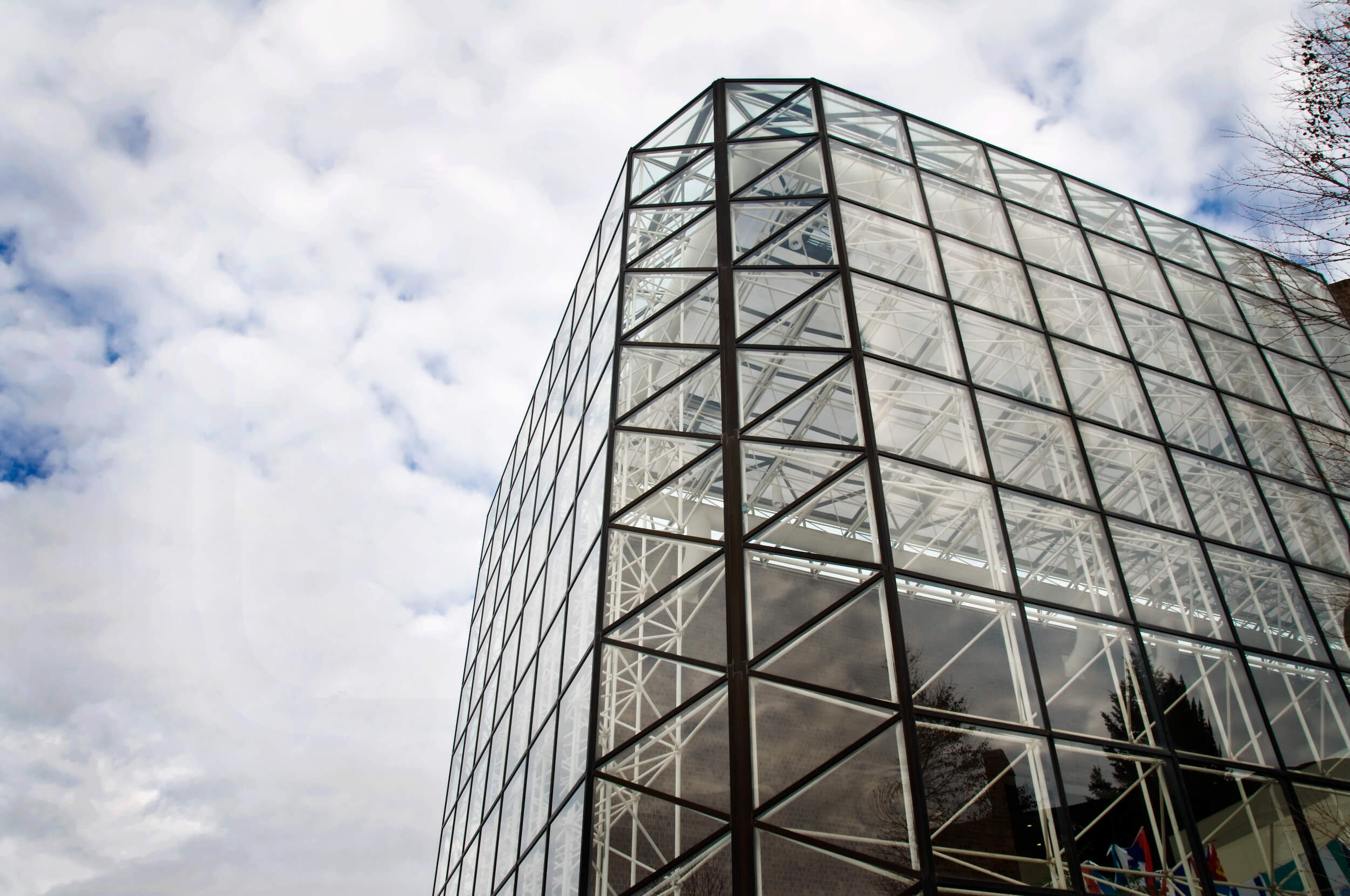 Tibet sediments reveal climate patterns from millions of years ago

The Tibetan Plateau in China experiences the strongest monsoon system on Earth, with powerful winds—and accompanying intense rains in the summer months—caused by a complex system of global air circulation patterns and differences in surface temperatures between land and oceans.

These extreme weather patterns make this area an ideal location for climate scientists to study the delicate interconnected web of the global climate system. 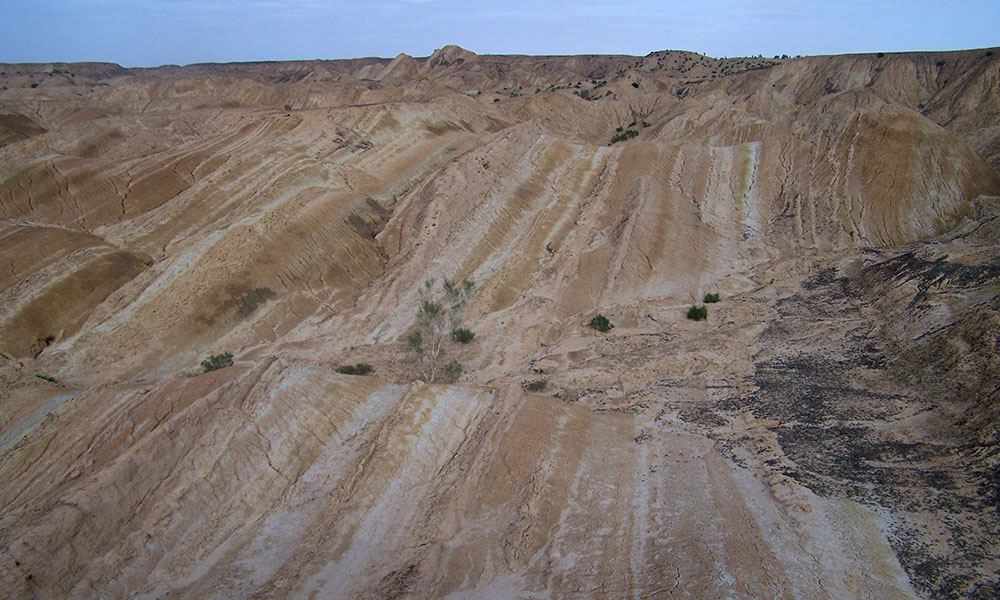 Stratification in Tibet sediment. Climate variations are reflected in color variations with the red sediment typically indicating a wetter climate and the white indicating a drier climate. “You can literally walk up time as you sample the sediment,” says Carmala Garzione, a professor of earth and environmental sciences. (University photo / Qingquan Meng)

Carmala Garzione, a professor of earth and environmental sciences at the University of Rochester, and Junsheng Nie, a visiting research associate at the University, surveyed sediment samples from the northern Tibetan Plateau’s Qaidam Basin and were able to construct paleoclimate cycle records from the late Miocene epoch of Earth’s history, which lasted from approximately 11 to 5.3 million years ago. They recently published their findings in Science Advances.

Reconstructing past climate records can help scientists determine both natural patterns and the ways in which future glacial events and greenhouse gas emissions may affect global systems.

Based on previous research on ice core, marine, and sediment records, researchers determined that for the past 800,000 years, Northern Hemisphere ice ages—in which vast areas of North America, Europe, and Asia are covered with thick sheets of ice—occurred about every 100,000 years. Prior to that period, ice ages occurred more frequently, on cycles of 41,000 years, and scientists believed this was the norm.

Using the sediment samples from the Qaidam Basin, Nie and Garzione show that the East Asian monsoon patterns in the late Miocene also follow similar 100,000 year cycles, with stronger monsoons peaking at 100,000 years and diminishing in the periods in between. This reveals a greater than 6 million earlier onset of these 100,000 year cycles than was previously documented.

“People have been thinking that the 100,000 year cycle was a later Quaternary [present-day] climate anomaly,” Nie says. “But from our results, we see that it’s not an anomaly, it was present many years before.”

Several factors affect these cycles, but they are ultimately determined by orbital forcing—the Sun’s radiation received by the Earth due to variations in the Earth’s orbit in the solar system. There are three types of variations that occur simultaneously, known as the Milankovitch Cycles:

“Each of these factors influences incoming solar radiation and how the earth is absorbing heat,” Garzione says.

These are schematic illustrations not shown to scale. 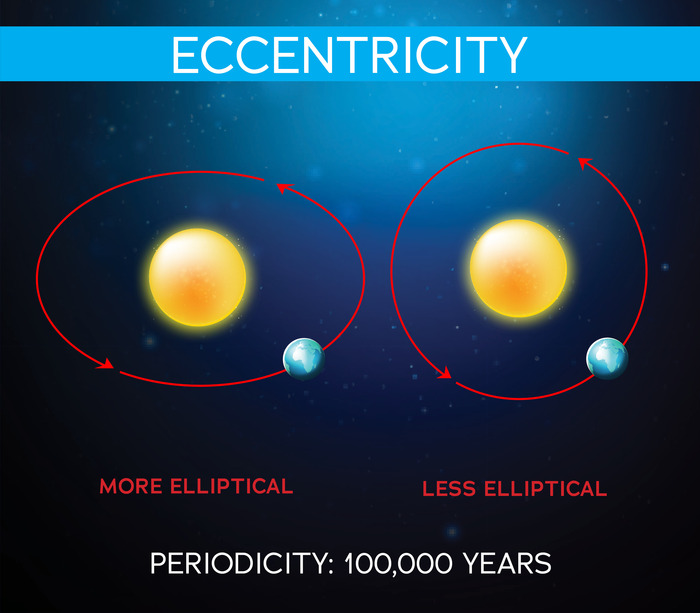 Eccentricity: How the Earth rotates around the Sun. The shape of Earth’s orbit gradually changes from being more oval to more round over a period of 100,000 years. Artist’s note: the eccentricity scale in this illustration is exaggerated. (University illustration / Julia Joshpe) 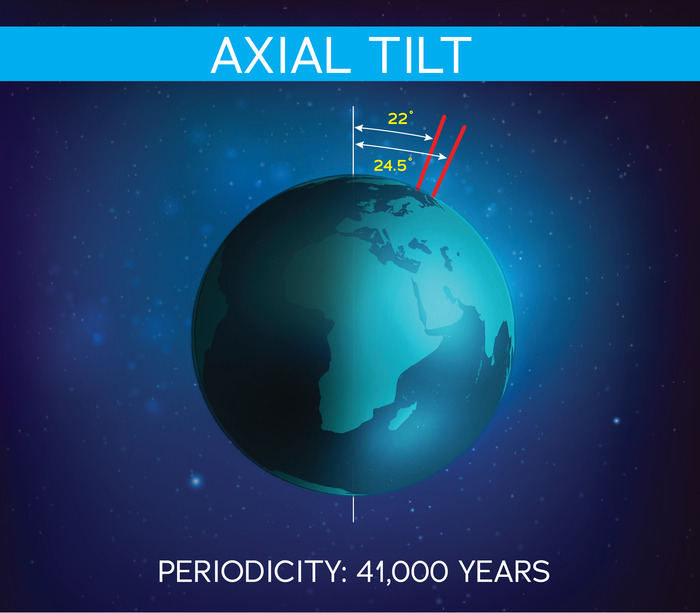 Axial tilt: The Earth tilts toward the Sun at an angle that changes from an approximate 22-degree tilt to a 24.5-degree tilt over a period of 41,000 years. (University illustration / Julia Joshpe) 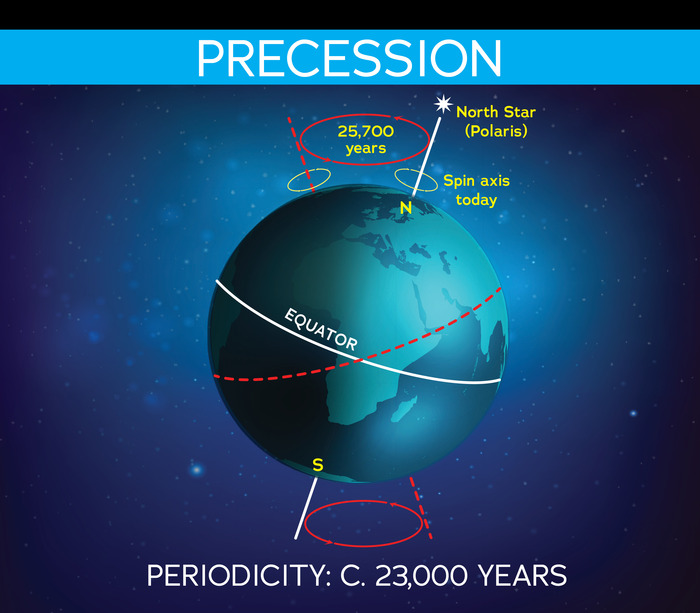 Precession: The Earth slowly wobbles as it spins, much like a toy top, while at the same time, the Earth’s rotational axis—the line from the north to south poles—rotates. The interaction of these two processes results in cyclical movement of equinoxes over a period of approximately 23,000 years. (University illustration: Julia Joshpe)

Mysteries remain because eccentricity is the weakest cycle, so should logically not be the dominant cycle for climatic events. It is not only sunlight that plays a role in these cycles, but the influence of glaciers and atmospheric carbon dioxide.

For the past one million years, the waxing and waning of Northern Hemisphere ice sheets—mainly those in Canada—have controlled the climate cycles, by affecting ocean currents, temperatures, and wind patterns. Southern Hemisphere ice in Antarctica has remained relatively fixed, without any major glacial melting to catalyze advances and retreats.

If so, the Southern Hemisphere ice sheets may once again exert dominant influence on climate cycles.