She heard a speech in the library as a freshman and was hooked. He had been an outspoken leader in his church since the age of 10. She came from one home in the city of Rochester and then found another on campus. Together, Caryl English ’18, Delvin Moody ’18, and Charlisa Goodlet ’17 have followed different paths that have led them to leadership roles, each serving as the president of student organizations focused on issues of race, black culture, activism, and advocacy. 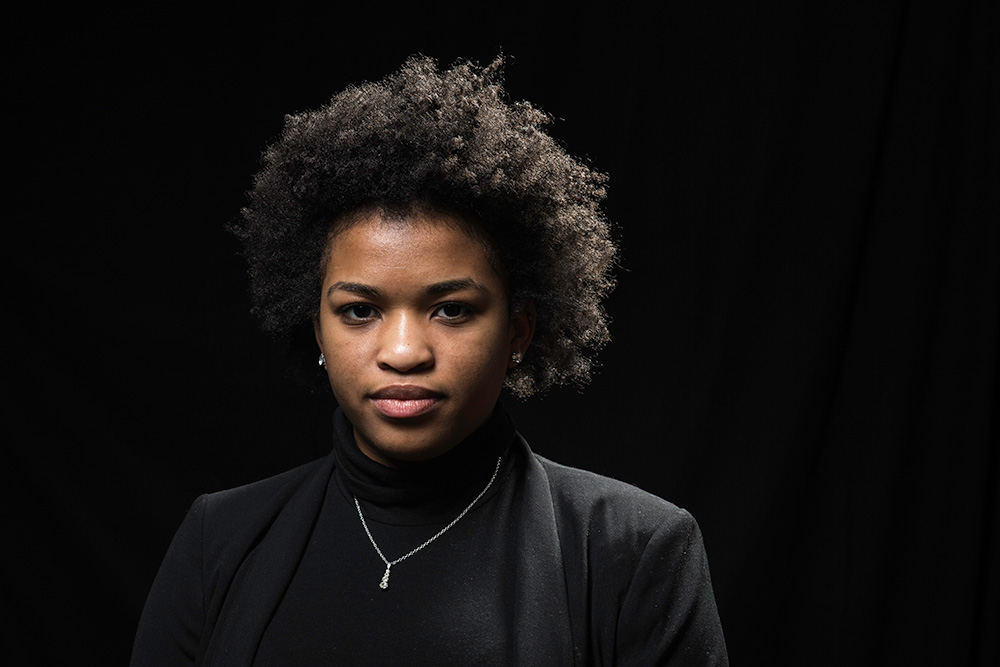 On the day before Labor Day of her freshman year, Caryl English ’18 entered Rush Rhees Library with dozens of other first-year students of color, all dressed in black business casual attire. It was the Black Students’ Union’s “Blackout,” an annual event designed to introduce freshmen to an array of organizations on campus. Upon hearing a BSU member’s elevator speech, she was hooked.

“I had never been a part of an organization that focused on black culture,” says English, a health, behavior and society and African and African-American studies dual major from Bronx, New York. “So I thought, where else to go but the Black Students’ Union? And it took off after that.”

Rochester’s BSU is one of hundreds of chapters of the National Black Students Union that emerged after the first Black Students Union was founded as a civil rights organization at San Francisco State University in 1966. Established in 1968, Rochester’s BSU today articulates the goals of promoting social and cultural awareness and diversity. Since English joined the group, BSU has played a key role in organizing such events as the Joint Collegiate Black Student Summit; a demonstration aligned with the Black Lives Matter movement and the November 2014 protests in Ferguson, Missouri; and initiatives to improve the racial climate on campus.

A first-generation college student, English didn’t know what to expect, or whom to look to for advice, when she arrived at Rochester as a freshman. But she quickly found that BSU helped fill that void.

“The first meeting you come to, they see a new face and they want to learn everything about you,” English says. “They say ‘hey, do you want to get food after this? What classes are you in? Do you need help?’ It was something that came naturally. It wasn’t forced.”

By the start of her sophomore year, she had also joined the Douglass Leadership House, the staff of the Frederick Douglass Institute for African and African-American Studies, and the phone team at the Admissions Office. Meanwhile, her peers in the BSU encouraged her to take up her first major campus leadership position as the group’s educational and political chair.

“I’d never considered myself a political person before college,” English says. “I feel like black people in college just become political, especially at PWIs,” she adds, using an acronym for predominantly white institutions.

Now, as president of the organization, she says, “It’s a lot more responsibility. It’s about being diplomatic, and that’s something I’m still learning now,” she says. She laughs, adding, “It’s a challenge, because I’m really strong in what I believe in.

“As a leader, when I’m working with friends, I try to be friendly. But I will admit, when things aren’t going well”—she smiles, and cocks her head to the side as she pounds the table with her fist.

Her experience in the BSU will help her move forward with her career goal of opening her own non-profit health center back in her home city. She hopes to create a resourceful and welcoming health community in the Bronx—similar to the type of community she has been a part of with BSU.

“I want to create a place where people can say, ‘this is somewhere you can count on to get resources, to get information, and where you can just go to talk about what’s happening to you.’” 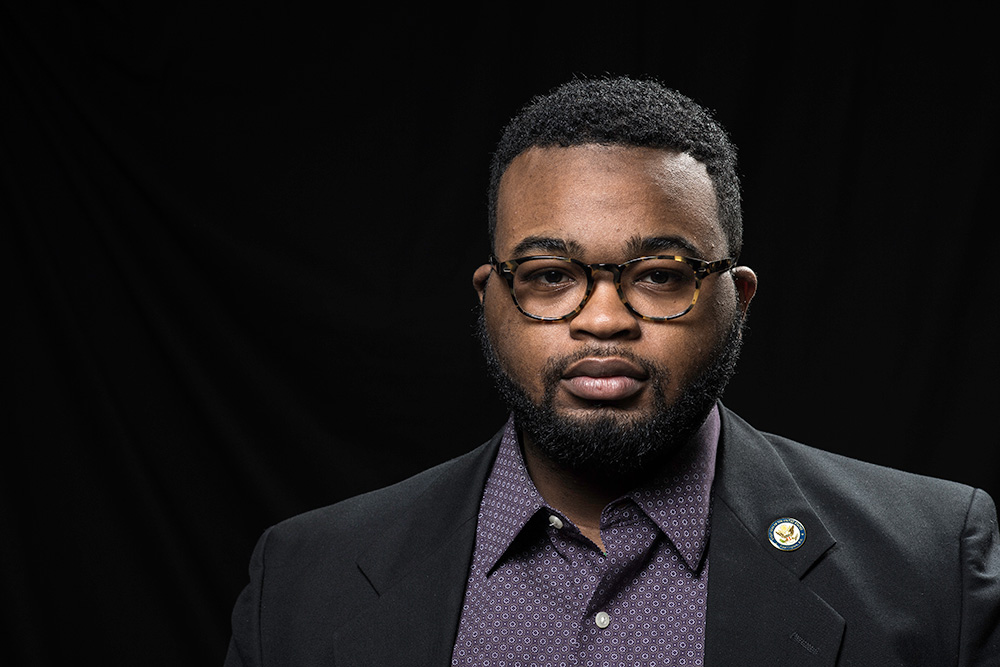 ‘I always felt called to do this work.’

Delvin Moody ’18 calls his passion for social justice “a lifetime in the making,” and he’s not kidding.

Growing up in Utica, New York, Moody and his family attended House of God, an historic, Pentecostal denominational church. Moody would hear messages of peace, hope, empowerment, and success.

“I came to believe that I could make a difference, and I could change people’s lives,” the political science and religion double major says. “It was inspirational.”

By 10, Moody was speaking regularly to the congregation, which earned him a front-page Sunday story in the Utica Observer-Dispatch. That article led to invitations to speak at churches across New York and as far away as Indiana and Florida. His mother and grandmother accompanied Moody, as he delivered messages of “hope and unity.”

At 11, he gave the keynote speech at Utica’s NAACP Black History Month celebration. At 12, he organized a four-day youth conference through his church. At 16, he attended the United Nations as a youth delegate. And at 17, as a junior at Thomas R. Proctor High School, he helped form Utica’s first Youth Common Council, a legislative body that could make recommendations to the city council and pass its own resolutions.

Moody brought to Rochester the same kind of leadership he brought to his church and hometown. Last year, he envisioned and organized the Joint Collegiate Black Student Summit, a national forum to discuss and develop viable solutions to problems facing the African-American community. Around 300 college students attended, coming from as far away as New Mexico and Indiana. A second summit will take place this year, on Friday, March 3 on the River Campus, with Moody serving as chairman.

He is also president of the Minority Student Advisory Board, a network of nine campus organizations focused on black, African, Latino, and Native American cultures; and chairman of the Students’ Association auditing task force, which analyzes organizational trends and tries to better support student clubs.

Moody calls himself an “advocate” rather than an “activist.”

“My church background taught me to help and support others,” he says. “I see needs in our community and remedies to fix things by making systematic changes. Being a youth minister in my church, I always felt called to do this work, but that call was beyond the church.”

“She had no formal education, but she kept me centered when it came to love and selflessness,” he says. “She’s still my go-to person.”

His idol is Barack Obama. Moody says Obama’s eight-year run as the nation’s first black president “meant everything” to him.

“The way he carried himself, his grace, his political mind . . . He didn’t always get things right. I didn’t always agree with him. But there’s no doubt, I feel he’s the personification of Martin Luther King Jr.’s vision.”

Moody believes racism is prevalent in America and has been magnified through social media and 24/7 news channels.

“It’s being pulled up from under the rug,” he says. “It’s a cancer that America hasn’t fully dealt with, something that’s ingrained in our society. And we need to deal with it.”

He says his message of hope is for everyone.

“Sometimes I don’t even mention that I’m a young black leader,” he says. “I’m a leader, fighting for justice for all people.”

Moody plans to return to Utica and fight for the less fortunate in his community. He would like to run for political office someday but wonders how accepted he would be.

“It’s an old industrial city,” he says. “It’s rough. When you’re a minority who is running, you wonder, could you put a majority coalition together?”

On campus, he leads a full life even outside academics and advocacy. He enjoys playing drums as well as steel guitar—“a weird instrument that no one plays,” he says.

He’s also working on a self-help book he hopes to publish.

“It’s from a Christian perspective and discusses how people don’t realize they are made to be winners,” he says. “We’re not as purposeful as we’re supposed to be. Sometimes, we just live. But we can do more.” 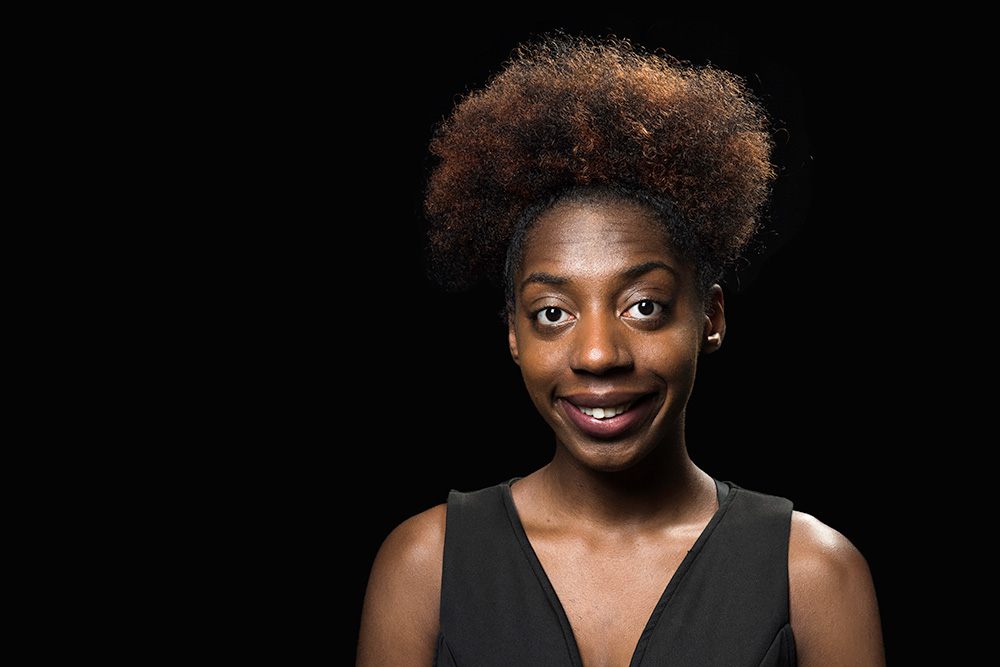 Charlisa Goodlet ‘17 is clear about what interests her. “Nothing excites me more than reading articles about black culture, race, and ethnic politics,” she says. “These are the foundations of our society.”

Goodlet is finishing up her second term as the president of the Douglass Leadership House. DLH, founded in 2012 and named for the abolitionist leader Frederick Douglass, “aims to celebrate and raise awareness of the many facets of the black experience, including its culture, politics, history, and Diasporic roots.”

Goodlet attended a general interest meeting at DLH as a freshman, in the hopes of finding a space on campus where she felt at home. She was hooked, and her commitment to the organization grew stronger under the mentorships of the organization’s first two presidents, Amber-Danielle Baldie ’15 and Sade Richardson ’15.

Baldie and Richardson were key organizers of peaceful demonstrations on campus in fall 2014. The demonstrations took place in the aftermath of a Ferguson, Missouri, grand jury’s decision not to indict the police officer who killed unarmed black teenager Michael Brown. Similar events took place at campuses and in cities around the nation.

“It’s tough work,” Goodlet says of the kind of activism DLH and other campus organizations undertook that year. “But it’s motivating because there are many people before me who have done the work that has allowed me to be here today, and long after I’m dead and gone there’s going to be someone else.”

At the end of that academic year, she decided to run for DLH president. She’s honored her mentors by continuing to move the group forward.

“I saw DLH in another light, extending beyond from where they had taken the organization,” she says.

A priority for Goodlet is helping to strengthen ties between University students and the greater Rochester community. In particular, she would like to see a closer relationship with the 19th Ward, the racially and economically diverse city neighborhood just across the Genesee from the River Campus. A native of Rochester, Goodlet moved with her family to the ward in 2013.

“There’s a lot of beauty in the 19th Ward, in the home-structures and in the culture,” she says. “Many people feel the Ward is a place of violence and negativity, but every section of Rochester has its own issues with crime.” She believes that if students had a more complete picture of the neighborhood, they would see it as more integral to their lives as students.

Goodlet laments that discussion sometimes turns to gentrification or other efforts to raise property values. She believes instead that a successful integration between University students and local residents ultimately rests on community programming. She cites community gardens, neighborhood forums, and initiatives such as Wall\Therapy—a Rochester organization that advertises itself as an “art and community intervention project”—as examples.

Goodlet works hard to balance her role as DLH president with her academic work. “We’re here for school, but the house is bigger than school,” she says. “It’s a contribution to society in a way, which is why it’s so damn stressful to be in a leadership role, but it’s worth every minute.”

“My dream job would combine being a political scientist, lawyer, and writer,” she adds. In the interim, she supplements her coursework with work as a research assistant at the David T. Kearns Center for Leadership and Diversity.

“I’ve looked at 10 years of data for the University and tried to figure out how we can increase faculty diversity,” she says. “We know that the number of minority students going into faculty work is low, so how can we get students of color to actually pursue the pipeline of becoming a faculty member?”

She’ll present her research at DLH next week.