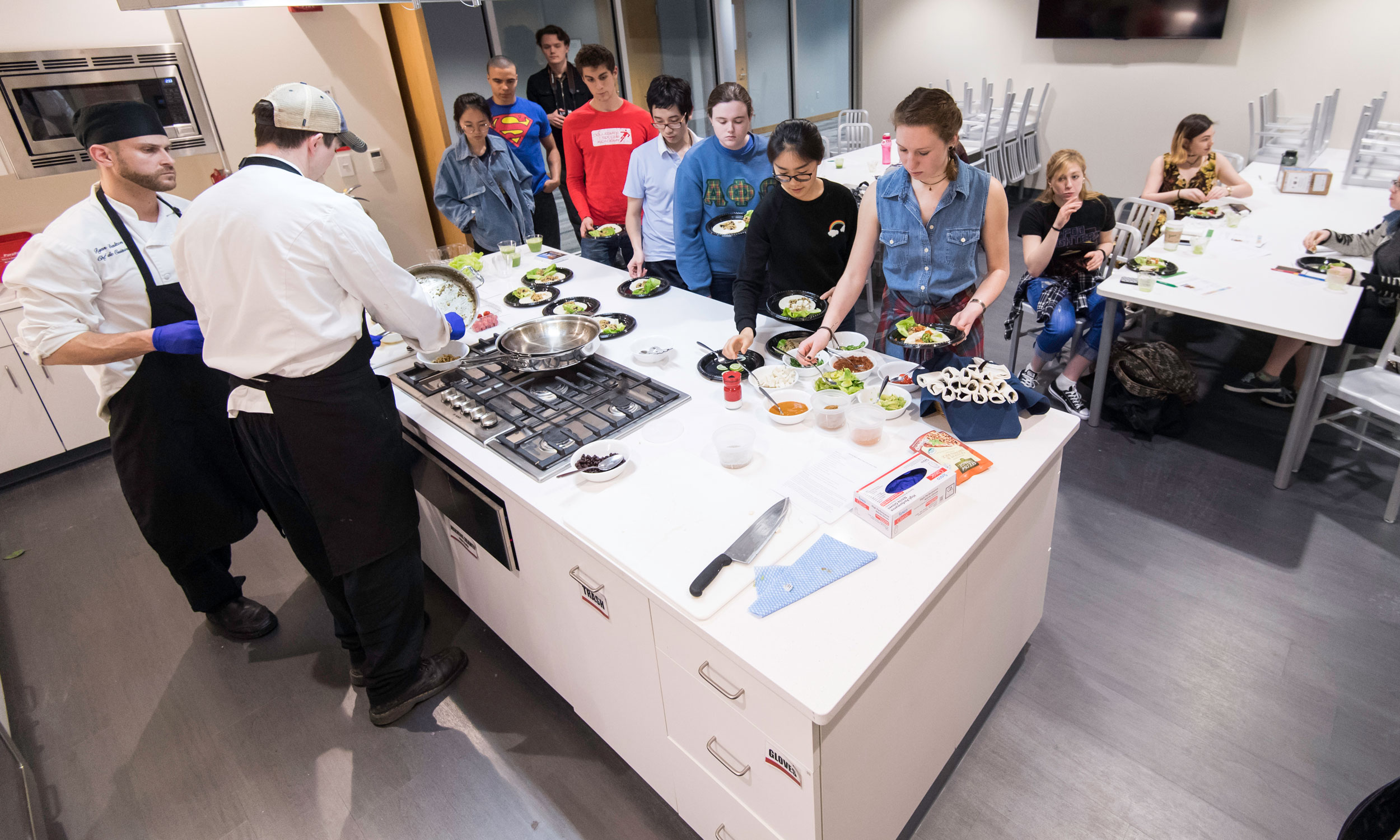 The UR Photography Club usually meets at Havens Lounge in Wilson Commons, but president Aaron Raymond ’18 decided to mix things up recently.

“I thought a good photography workshop with food would interest our members,” the environmental studies major from Dallas says.

The food was great. The camaraderie was even better.

“The kitchen had an intimate, homelike feel to it,” Raymond says. “Club members could relax and sit around the tables or get involved by helping to plate the food or clean up after cooking. Overall, we had a great time.”

They’re not the only ones. Since opening in late January, the kitchen has been a hit with student organizations and faculty, who have held some of their classes there.

“Based on the usage we’re seeing, we’ve really created something that students, faculty, and instructors are looking for,” says Laura Ballou ’97, assistant dean of student life and director of the Campus Center, which includes Douglass Commons and Wilson Commons. “The idea of coming together over food and sharing culture is powerful.”

Several foreign language classes have used the spot. In Abby Comstock-Gay’s Intermediate Turkish class, students cooked a dish called menemen while chatting in Turkish, practicing new words, and listening to Turkish music. Comstock-Gay provided the recipe in Turkish, plus the ingredients, and the students did the rest. In Pablo Sierra’s history class, The Other Atlantic: Ethnohistory and Memory, students used the kitchen to prepare a Mexican chocolate called oaxacan.

“Students learned to use the molinillo, a traditional chocolate stirrer, to prepare the hot beverage,” Sierra says. “We also added achiote paste to the ground chocolate to approximate the Mesoamerican flavoring used in Maya and Nahua regions.” 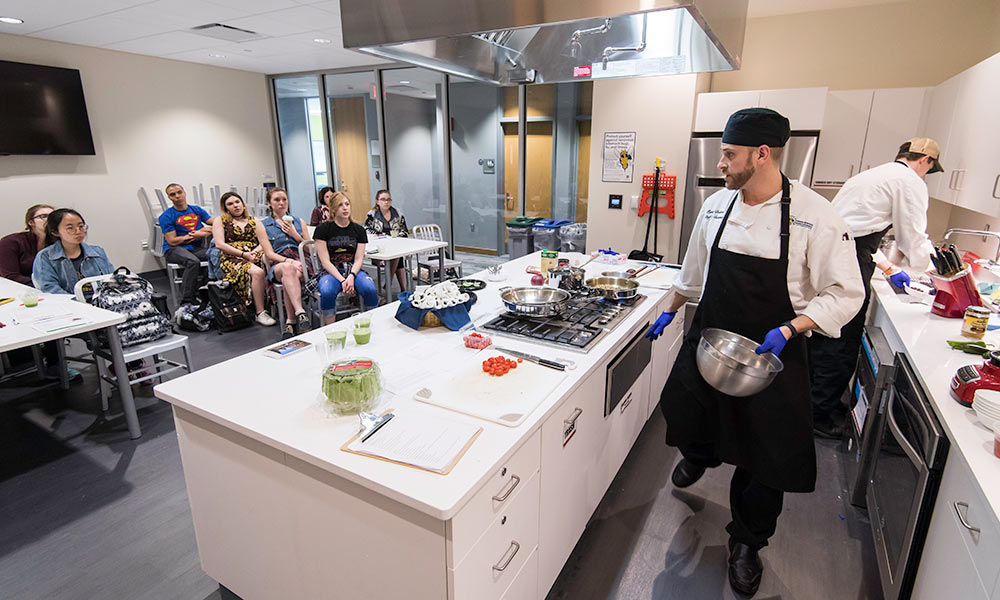 Donna Logan, director of the University’s Arezzo program, hosted an event sponsored by the Center for Education Abroad, and did the cooking with help from students. The menu included a rustic Tuscan pate, a red crostini sauce, fagioli all’uccelletto, a zucchini and onion frittata, tiramisu, cantuccini (Tuscan biscotti), an apricot crostata, and pane e Nutella.

“My experience in the kitchen was very positive—so much so that I hope to do another event there soon,” Logan says. “The equipment is top of the line and a pleasure to use.”

The Korean American Student Association used the kitchen to film a video clip for Korea Night Live and cooked two different ramen dishes along with dumplings.

“It was special, because we were able to cook on campus,” says club president Hae-jun Oh ’18, a Manchester Center, Vermont, native majoring in physics and applied math. “If we were to plan a monthly or weekly event there, I could see members bonding over cooking and eating Korean cuisine. It was a great experience.”

The Undergrad Chemistry Council stayed away from the stove, but used the kitchen facilities to make freeze-dried ice cream at its Liquid Nitro Ice Cream Social.

The kitchen is open by reservation anytime Douglass is open and features two long white tables, each with 12 chairs. There’s a flat-screen television, oven, gas-top range, sink, refrigerator/freezer, garbage disposal, warming tray, and a commercial-grade dishwater that cleans in 90 seconds.

Clubs and classes interested in using the kitchen must sign up for training provided by David Graupman, assistant director of student life operations.

“Students were asking for a place like this,” Graupman says, “and they seem to love it.”

Alcohol isn’t allowed, not even for cooking, and all food must come from a licensed New York State vendor. Food from home gardens is not allowed, and all food cooked in the kitchen must be consumed in that space.

“You can’t bring it somewhere else or sell it,” Graupman says.

Years ago, there was a cooking club at the University. When Ballou learned that a community kitchen was being designed, she envisioned such a club returning to campus. Her hopes were realized recently when three freshmen—Rosemary Aviste ’20, Samantha Koplik ’20, and Zhiyu (Zoey) Gong ’20—formed the UR Cooking Club.

“The Douglass Community Kitchen definitely helped inspire the formation of our club,” says Aviste, a brain and cognitive sciences and psychology double major from Black River, New York. “We all cooked in our respective residence hall kitchens, which gave us the idea to start a club, but the presence of the community kitchen really allowed us to develop our idea and put it into action.”

Aviste says UR Cooking Club’s goal is to “incorporate as many cultures as we can by collaborating with other groups on campus.”

Ballou says the new club is further proof that the Douglass Community Kitchen has been a success.

“It shows that we built something the students were looking for,” she says. “They’re excited, and we’re excited, about what lies ahead.”