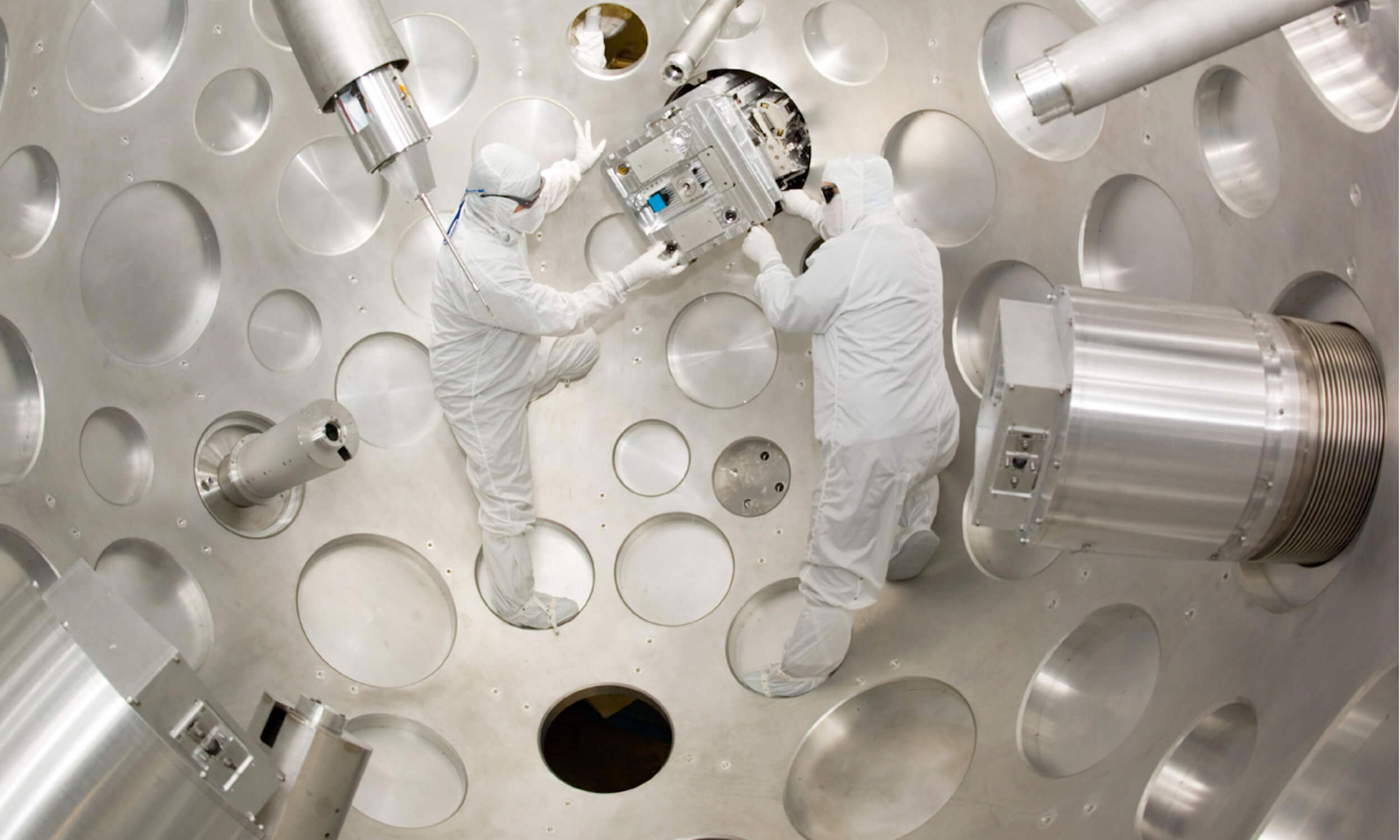 Imaging at the speed of light

Imaging at the speed of light

Tiny micro- and nanoscale structures within a material’s surface are invisible to the naked eye, but play a big role in determining a material’s physical, chemical, and biomedical properties. Over the past few years, Chunlei Guo and his research team at the University of Rochester have found ways to manipulate those structures by irradiating laser pulses to a material’s surface. They’ve altered materials to make them repel water, attract water, and absorb great amounts of light—all without any type of coating. 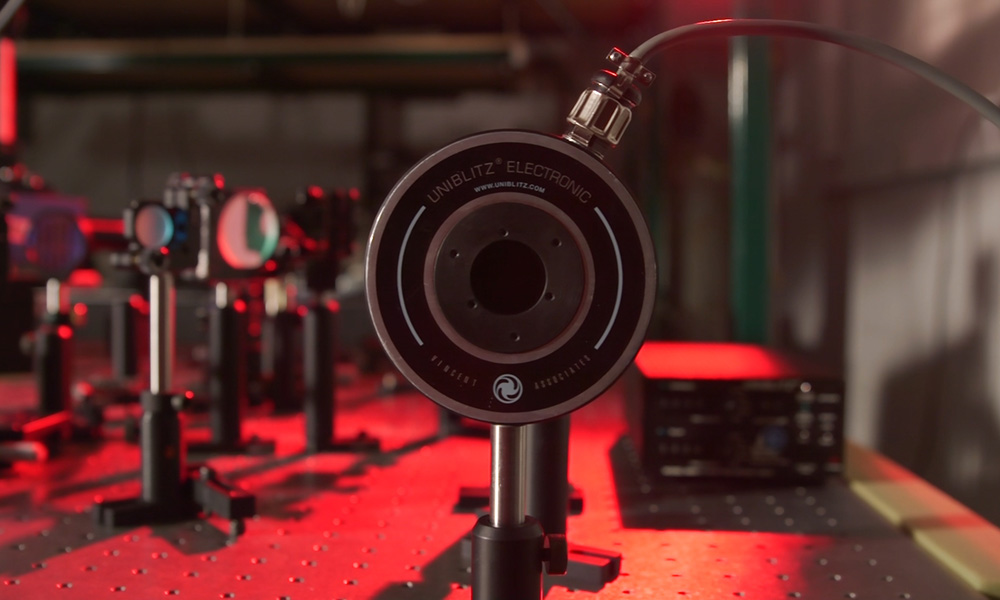 Now, Guo, Anatoliy Vorobyev, and Ranran Fang, researchers at the University’s Institute of Optics, have advanced the research another step. They’ve developed a technique to visualize, for the first time, the complete evolution of micro- and nanoscale structural formation on a material’s surface, both during and after the application of a laser pulse. 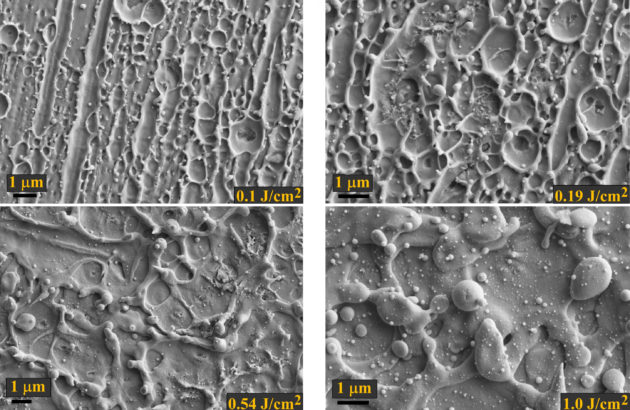 Having that control will open the way for improvements in all kinds of technologies, including anti-corrosive building materials, energy absorbers, fuel cells, space telescopes, airplane de-icing, medical instrumentation, and sanitation in third world countries.

In a paper published in the Nature journal Light: Science & Applications, the group introduced a scattered-light imaging technique that allows them to record an ultrafast movie of the ways in which laser radiation alters a material’s surface. The technique opens a window on the entire process, from the moment a laser hits the material to melting, transient surface fluctuations, and resolidification resulting in permanent micro- and nanostructures.

It currently takes about an hour to pattern a one-inch by one-inch metal sample. Identifying how micro- and nanostructures form has the potential to allow scientists to streamline the creation of these structures—including increasing the speed and efficiency of patterning surfaces.Creating and altering these small structures makes properties intrinsically part of the material and reduces the need for temporary chemical coatings.

To produce these effects, researchers use a femtosecond laser. This laser produces an ultra-fast pulse with a duration of tens of femtoseconds. (A femtosecond is equal to one quadrillionth of a second.) 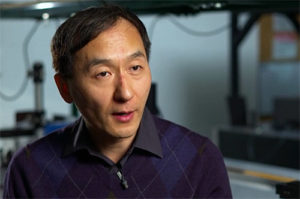 Chunlei Guo, a professor of optics, was featured as part of an Xploration Earth 2050 segment that aired on Fox stations across the country. Guo discusses his research in super-hydrophobic surfaces and the beneficial applications it has to vehicles, construction materials, and sanitation.

Changing the laser’s conditions causes changes in the morphological features of the surface structures— such as their geometry, size, and density—leading the material to exhibit various specific physical properties.

To put this into perspective: Vorobyev explains that it takes about one second for light to travel from Earth to the moon. However, light travels only about one foot in a nanosecond and approximately 0.3 micrometers in a femtosecond, which is a distance comparable to the diameter of a virus or bacteria.

So how was Guo’s team able to record frames at an interval of femtoseconds, picoseconds, and nanoseconds? They used a technique involving scattered light. During a femtosecond laser pulse, the beam is split in two: one pump beam is aimed at the material target in order to cause micro- and nanostructural change, and the second probe beam acts as a flashbulb to illuminate the process and record it into a CCD camera—a highly-sensitive imaging device with high-resolution capabilities. 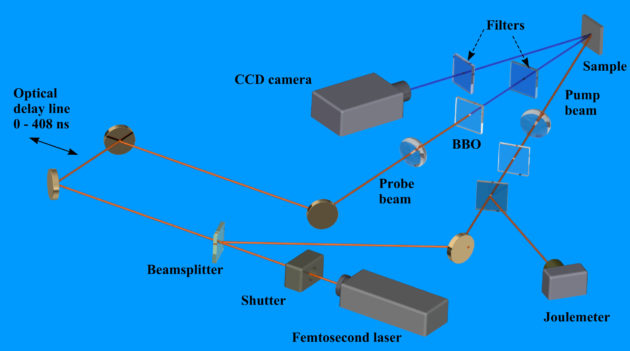 “We worked very hard to develop this new technique,” Guo says. “With the scattered light pulsing at femtosecond time intervals, we can capture the very small changes at an extremely fast speed. From these images we can clearly see how the structures start to form.”Guo explains that this scattered light visualization technique has applications for capturing any process that takes place on a minute scale.  “The technique we developed is not necessarily limited to just studying the surface effects produced in my lab. The foundation we laid in this work is very important for studying ultrafast and tiny changes on a material surface.” This includes studying melting, crystallography, fluid dynamics, and even cell activities.

This research was supported by the US Army Research Office and the Bill & Melinda Gates Foundation.