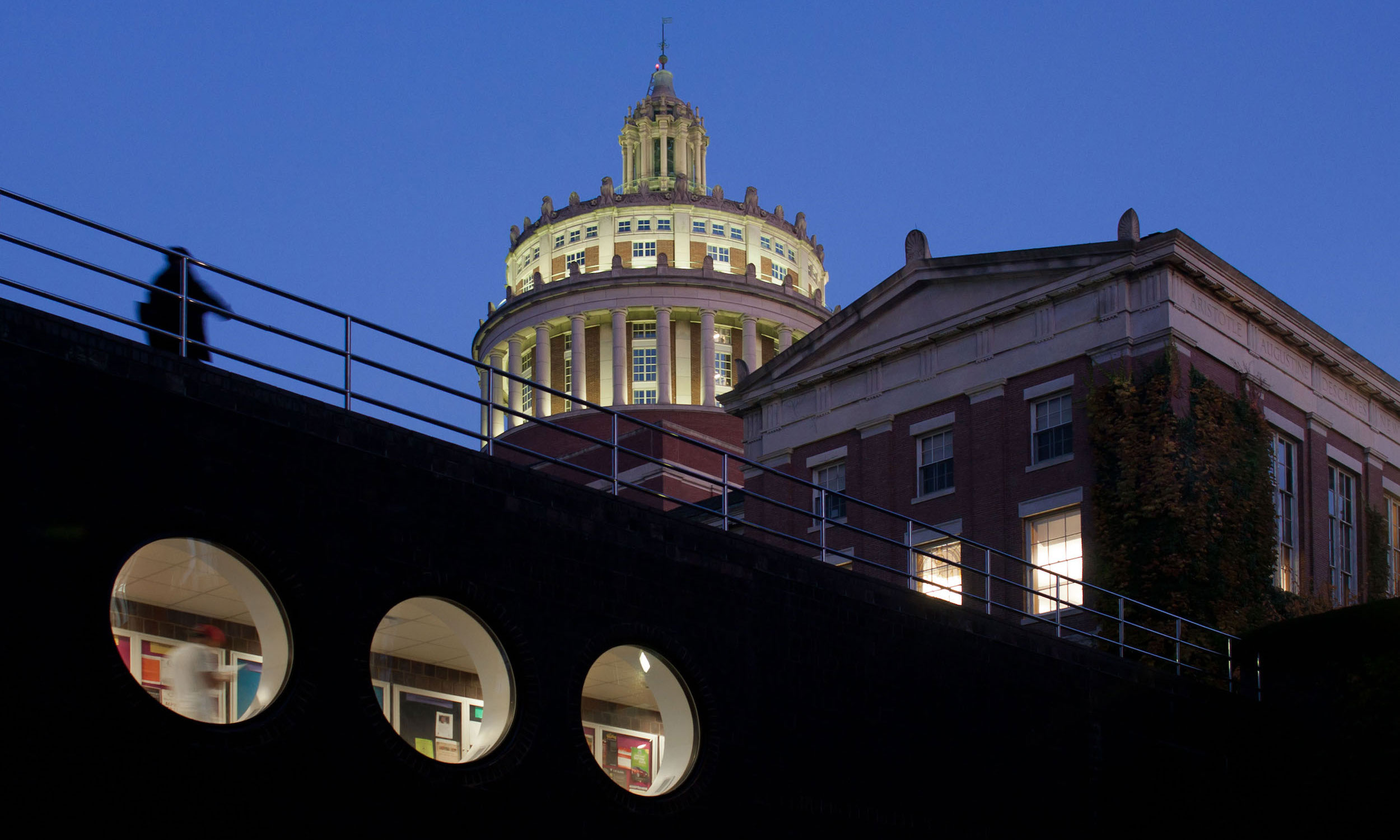 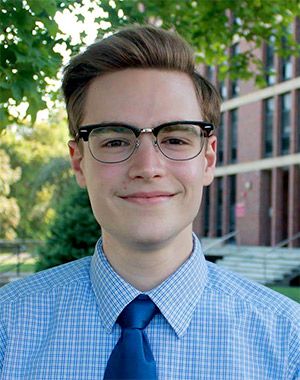 Aurek Ransom ’18 has packed a lot into four years at the University.

He’s a dual major in English and computer science. He was editor-in-chief of the Campus Times, serves as an associate justice on the All-Campus Judicial Council, played alto saxophone in the University pep band, and is the team lead in the student-run Hartnett Gallery at Wilson Commons.

But Ransom still has a thirst for education, one he’ll help quench as a Take Five Scholar.

The Take Five Scholars Program, unique to the University, provides an additional year of academic study, tuition-free, to selected students.

“It’s a terrifically exciting opportunity,” the Syracuse, New York, native says. “I’m eager, and grateful, to be here next year taking advantage of it.”

Since 1986, the first year of the program, more than 1,100 students have been named Take Five Scholars. Ransom is one of 35 students selected in the most recent round of admissions.

To be considered for the one-year scholarship, a student must develop a two-semester program of related courses which, taken together, address an overarching question or explore a topic from the perspective of multiple disciplines. Taken as a group, the course programs of admitted students are as diverse as the student body itself: Shake it like a Polaroid: Observing Urban Culture through a Lens; Music, Language, and the Mind; the Roots of Religious Belief Systems; German Studies; and so on. 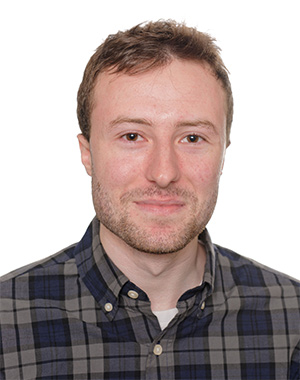 Austin Bailey ‘18, a chemistry major from West Hartford, Connecticut, was admitted for the program Writing as an Exploration of Verbal Wit.

“Many of my favorite authors are especially talented because of their relentless verbal wit,” he says. “People like David Foster Wallace, or Kurt Vonnegut know how to finesse language in such a laser-precise way that you often burst out in laughter at the way they construct their scenes, environments, and characters.”

Having spent much of his time devoted to the sciences, Bailey says that the extra year “will be an excellent time to explore the other side of my intellectual capabilities and build myself in ways that I didn’t before.”

The Take Five program rewards intellectual curiosity. It is not designed for students to wrack up additional credentials, and can’t be used to satisfy graduation, major, minor, or cluster requirements. Students must complete 128 credits prior to beginning their tuition-free year.

Hannah Geitner ‘18, a dual major in studio arts and archaeology, technology and historical structure, was admitted for Study of the Interaction of Physics and Music.

“Two majors take up a lot of time,” the Fulton, New York, native says. “I wanted to be able to explore more [of what] the University offers before leaving campus. Music was a big part of my life before I came here and stopped playing my instruments.”Geitner will take courses in the audio and music engineering, music, and physics departments. 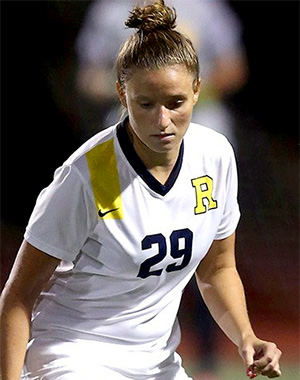 The selection committee includes a student currently in the Take Five program, a college dean, and a faculty member each from humanities, social sciences, natural sciences and engineering. They make the final decisions but have no limit on how many students they can accept. A successful application presents a focused statement of purpose and a corresponding cohesive schedule of courses.

“The committee wants to feel that there’s an intellectual spark to a proposal,” says Emil Homerin, a professor of religion and chair of the Take Five committee for the past 10 years.

There’s no thesis or final project, but all Take Five Scholars are required to write an abstract summarizing their experiences.

“The Take Five program provides a perfect capstone to the Rochester curriculum,” says Richard Feldman, dean of the College. “The typical image of a Take Five student is the science or engineering major who spends their fifth year studying religion, history, or some other area in the humanities. While many Take Five students do fit this description, there are also many who do not. There are examples of music majors studying public health and philosophy majors studying math. These students have surely taken maximum advantage of what the College has to offer.”

Take Five was honored in 2007 with the University’s Goergen Award for Curricular Achievement in Undergraduate Education. Its impact can best be described by one graduate who took a fifth year to study astronomy and philosophy—“not for any practical purpose, but just to know, and to get one step closer to finding my place in the universe.” 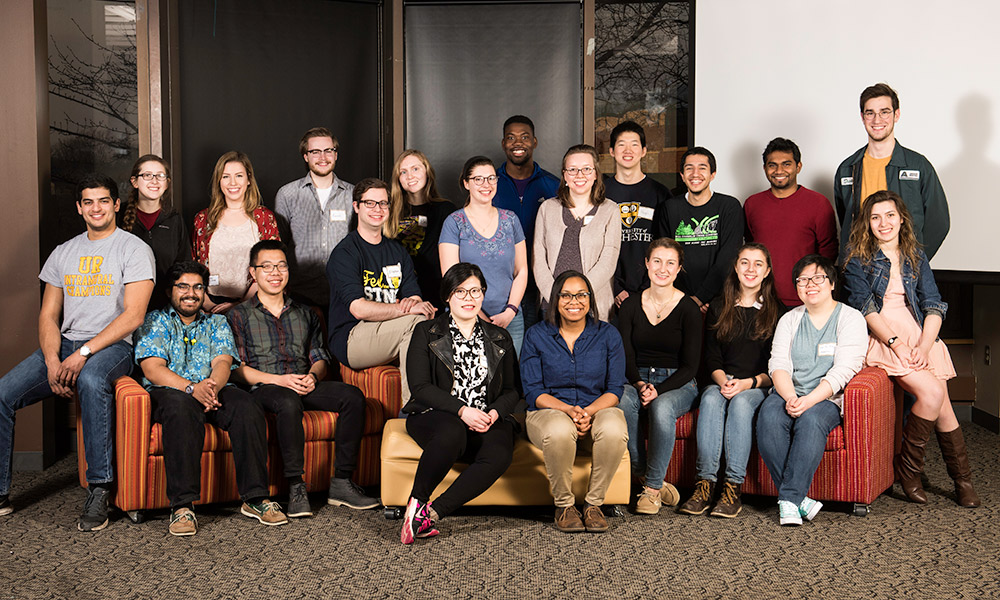 Here are the 35 University students selected in the most recent round of Take Five admissions, along with the title of their program of courses:

Austin Bailey ’18: Writing as an Exploration of Verbal Wit

William Beeley ’18: Music as a Form of Communication

Cameron Coykendall ’17: The Impact of the Relationship Between Latin America and the United States on Structural Violence

Misael Cruz ’18: Italian Language and the Study of its Culture

Joseph Fong ’18: Behind the Curtain: the Underlying Economics of American Entertainment

Hannah Geitner ’18: Study of the Interaction of Physics and Music

Nicholas Kasper ’18: Using Linguistics to Improve Educational Conversations About Privilege: Or, How to Argue with Bigots on the Internet and Win

Heewoo Kim ’17: History and Its Influence on Shaping Identity in Modern East Asia

Brynn Lauer ’18: Religion in Societal Views on Gender and Sexuality

Ruoyu Li ’18: Islamic Culture and its Influences on Art Worldwide

Nisha Modi ’18: The Rights of Muslim Women in Society

Sean Mulligan ’18E: The Formation and Transformation of Cultures through Storytelling

Arun Nambiar ’18: Shake it Like a Polaroid: Observing Urban Culture Through a Lens

Aurek Ransom ’18: How U.S. Law Reflects Values, Desires, and Ideas of Justice—in Theory and in Practice

David Weissman ’18: A Search for Religious Identity and the Problem of Evil