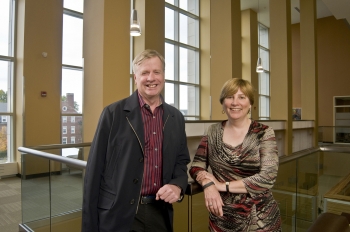 Ironic as it may be, Charlie Symington ’80, ’81S (MBA) and his wife, Maggie Symington, primarily support a part of the University of Rochester that he never knew existed when he was a student here.

“When we moved back to Rochester three years ago, we wanted to give back and give local,” explained Maggie. “We asked our friends, ‘How do we get involved and make a difference?’ and they said, ‘Join the George Eastman Circle!’”

The Symingtons were impressed that the Circle offered so many options for them to direct their support and connect with other members. After conversations about what was most important to them, they decided that education and helping the community were their top priorities.

It was at a George Eastman Circle event that they heard Lynn Gatto, assistant professor and executive director of Horizons at Warner, speak about the life-changing experiences offered by Horizons and the per-child cost of the program. Charlie and Maggie decided to sponsor a child, and thanks to a matching gift from MetLife, from which Charlie is retired, they now sponsor two children through their George Eastman Circle support.

“We believe the Warner School is underserved, and we knew our money would be appreciated,” said Charlie. The Symingtons were invited to spend part of a day at Horizons, and they even sponsored a visiting author. “Allowing visitors is a great way to show off what they’re doing through this program.”

As members of the Warner School National Council, Charlie and Maggie view themselves as emissaries for the School, as they are constantly sharing their excitement with others.

“The inspiring thing about the University of Rochester is that people have the ability to make a difference even if they can’t give a million dollars,” noted Maggie. “The George Eastman Circle values support at all levels, and having a five-year commitment makes it more of a relationship rather than a transaction.”