For Julia and Aspiring Nurses

For Julia and Aspiring Nurses 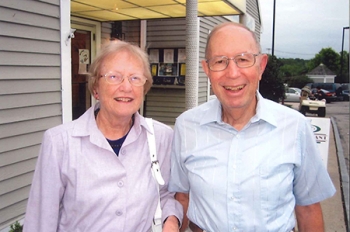 The year was 1949 when John (Jack) Schottmiller ’53 entered the University of Rochester as a freshman. He chose this University because of its reputation, confident that a Rochester degree would either get him into graduate school or a good job. At a time when there were still separate campuses for men and women, Jack and his friends were especially fond of the monthly dances hosted by the School of Nursing.

He eventually married a nurse named Anne, who was among the first class at Georgetown University to earn both a bachelor’s degree in nursing science and an R.N. Her career choice made an impression on their daughter, Julia Schottmiller-Koestner ’84N, who earned her nursing degree at the University of Rochester. Interested in gerontology, she pursued her master’s degree in nursing science at McGill University’s Ingram School of Nursing in Montreal when she and her husband, Richard, moved to Canada.

Tragically, Julia was killed during a visit to Prague in 1990 and was awarded her master’s degree posthumously. To preserve her memory and encourage other young nurses like their daughter, Jack and Anne established an endowed scholarship in her name. As the couple added to the fund each year, they developed a habit of generously giving to the School of Nursing.

The couple remained active supporters of the School, regularly attending events and enjoying opportunities to meet each dean over the years. When asked to join the George Eastman Circle, they knew they would direct their support to the School of Nursing, but now their generosity would be applied to more than scholarships—it would go to wherever the School needed it most.

Jack, who has a Ph.D. in chemistry, retired from Xerox in 1992 and then ran his own consulting company until 2007. As a Xerox retiree, he is able to bolster his contributions to post-secondary educational institutions through matching gifts. “It makes you feel good that they’re supporting your donation,” comments Jack. “Xerox helps us make a bigger impact than we could by ourselves.”

The Schottmillers also appreciate the camaraderie they share with others in the George Eastman Circle. “At events, members can identify each other by our nametags, and it makes us feel like we are part of an elite class of donors. There is a certain amount of personal satisfaction in being part of a group that has a special concern for the University of Rochester.”